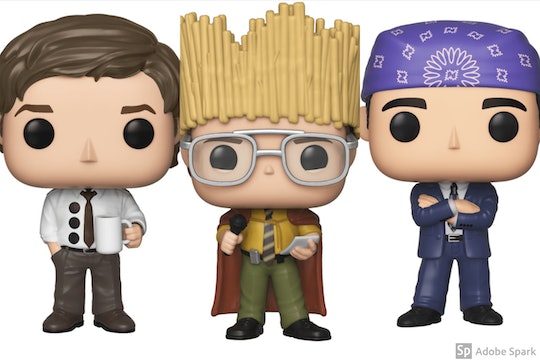 OMG, You're Going To Need *All* Of The New 'The Office' Pop! Figurines

Fans of The Office still can't get enough of the Dunder-Mifflin crew even now, six years after the iconic show went off the air after nine amazing seasons. That's why toy brand Funko has announced that they are adding 10 new The Office Pop! characters to their line-up of collectible memorabilia from the show. Get ready to re-live your favorite moments from the show over and over again as you discover which characters' classic looks Funko has re-created.

On Twitter, Funko has been dropping hints about new Pop! characters from The Office, and even launched an exclusive design featuring Jim Halpert and his 3-hole punch Halloween costume shirt (best lazy Halloween costume ever!) exclusively for sale on their website for a limited time on Aug. 7. Now, even more of your favorite moments from The Office have been immortalized by Funko, and while an exact date has yet to be announced, Funko's website states that they're "coming soon" to stores near you.

As if you needed one more reason to make a Target run, two characters from The Office will debut soon at Target stores. At Target, you'll find Goldenface Jim Halpert, the main antagonist in Threat Level Midnight, Michael Scott's unforgettable original screenplay about his alter ego Michael Scarn. Also at Target, you can soon find an Andy Bernard Pop! playing his banjo, because who doesn't need more Andy in their life?

Jim dressing as Dwight and impersonating him while sitting at their desks is a moment from the show that you won't soon forget right? False! You'll never forget, because identity theft is not a joke, Jim, and you'll also have a Funko Pop! character to remind you. This particular character will be available at Box Lunch stores soon, according to Funko's website.

Although he was never officially crowned Hay King during the Schrute family's traditional hay festivals, Funko's version of Dwight as the Hay King commemorates the episode in Season 7 where Dwight throws a hay festival in the parking lot of the office and crowns himself Hay King. If you ever find yourself in a hay maze, the Dwight Hay King Pop! that's available soon at Walmart might serve to comfort you so that you don't panic like Kevin did that day.

While I'm not superstitious, I am a little "stitious" and need to let you know that two of Michael Scott's most celebrated character moments on the show are about to be available as Pop! figurines. Date Mike, the casually cool, yet sleazy in a hilarious way version of Michael that he turns into when he goes out on a date will be available exclusively at Calendar Club. Although he won't be uttering the signature "Nice to meet me" phrase from the show, he is wearing that iconic Date Mike hat and wielding a pool cue. Prison Mike, complete with a purple bandana, won't tell you that the worst thing about prison was the Dementors, but can be found at Hot Topic stores, according to Funko's website. I declare that both versions of Michael Scott will be flying off the shelves. And no, I didn't say it, I declared it.

If you have a fan of The Office in your life, three of these new collectibles make the perfect Christmas gift. First, Michael as Classy Santa with his hand placed jauntily in his pocket is too cool for school (especially when you're talking to the Scott's Tots kids).

Next, remember when Dwight was dressed as an elf and attempted to piece together his secret Santa gift from Michael that's really a nutcracker, but he thinks it's a gun? Funko has commemorated that episode with a Dwight Elf Pop! that you definitely need. We all know it takes time to track down these Pop! characters, so getting a head start now on finding Dwight as Belsnickel will ensure that you have the perfect traditional Schrute Pennsylvania Dutch Christmas this year.

Although prices for each of these Funko Pop! characters have yet to be released, the current line of Pop! figures vary in pricing by retailer.