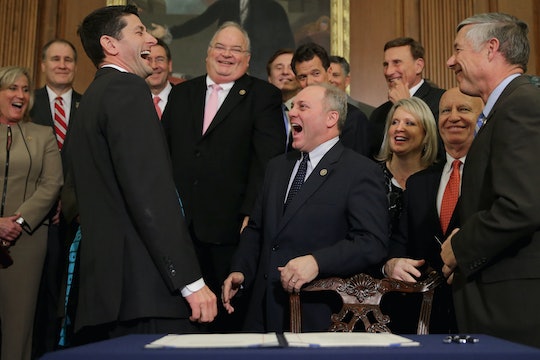 Republicans Keep ACA Protections In Place — For Themselves

It has been weeks since the Trump administration was forced to abandon its efforts to repeal and replace Obamacare with its own healthcare plan, the American Health Care Act. House Republicans have tried to come together to amend the health care proposal, with interesting results. Perhaps the most interesting recent development? This new health care amendment would allow Congress to keep Obamacare benefits that would potentially be denied other Americans. So I guess that means Obamacare was not nearly as much of a disaster as GOP members first insisted it was.

According to a report by Vox, the MacArthur Amendment, which is being authored by moderate New Jersey Rep. Tom MacArthur and House Freedom Caucus Chairman Mark Meadows, would exempt legislators and their staff from certain Obamacare repeal policies. One of those proposed repeal policies recommended by the MacArthur Amendment, which was obtained by Politico, would allow states to deny health insurance policy holders coverage if they have a preexisting condition, as long as their state had applied for a waiver.

What does this mean for everyone other than GOP Congress members and their staff? If this new healthcare plan is passed with the MacArthur Amendment, anyone living in a state which applies for a waiver to exempt themselves from Obamacare's ban on preexisting conditions could end up having to pay considerably more for health care.

This new exemption, which was brought to the attention of the public by a blog post written by health law professor Tim Jost, would protect members of Congress as well as their staff from being charged more for preexisting conditions. Essentially, Republicans seems to like the bits of Obamacare that protect them from paying high premiums if they're already sick, but don't seem terribly concerned about protecting the rest of Americans on the same level.

In an effort to stymie the potential backlash from the news, Rep. MacArthur released a statement on Wednesday, explaining that Congress was working towards fixing the issue:

Congressman MacArthur does not believe Members of Congress or their staff should receive special treatment and is working with House Leadership to make absolutely clear that Members of Congress and staff are subject to the same rules, provisions, and protections as all other Americans.

According to that same report by Vox, a member of MacArthur's office confirmed that the exemption was put in as a request from the Senate Budget Committee. So when you are preparing to send out your angry letters of protest or phone calls of protest, be sure to direct your frustrated ire their way.