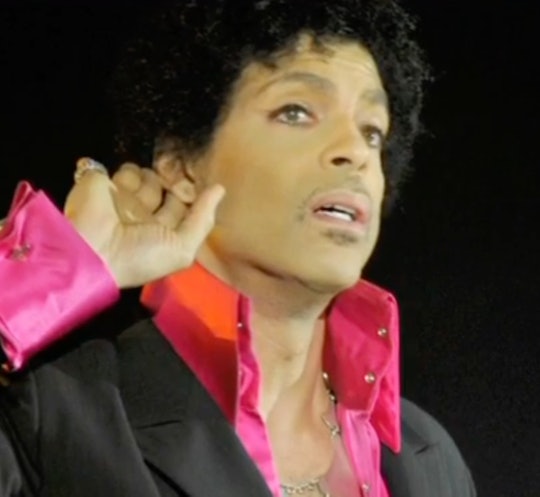 Although the iconic singer and entertainer Prince died more than a month ago, on April 21, the toxicology and autopsy reports that are expected to provide definitive answers about what exactly caused the 57-year-old's death at his Minnesota estate have not yet been released. When reports that the "Purple Rain" musician had died became public, stunned fans began to learn that a flight he had recently taken from Atlanta had made an emergency landing that so that an "unresponsive male" onboard — widely believed to be Prince himself — could receive medical attention. While evidence has since emerged that the megastar had been sick with the flu and even addicted to opioids before his sudden death, not much has been confirmed. Now, citing unnamed sources, The Minneapolis Star Tribune has reported that Prince may have died hours before his body was discovered and that he may have been using addictive opioids.

Earlier this month, a search warrant issued on Prince's estate revealed that a Minneapolis-area doctor had performed medical tests on the singer as well as prescribed him an undisclosed medication on April 7 as well as April 20, the day before he died. And on May 10, the U.S. Drug Enforcement Administration (DEA) conducted a raid on the Paisley Park estate. The DEA was reportedly trying to determine whether Prince has been unlawfully prescribed opioid medications.

The Star Tribune reported that a paramedic allegedly told others at the scene of Prince's death that he appeared to have been dead for at least six hours before his assistant, Meron Bekure, and Kirk Johnson, a longtime friend, drummer, and business associate, discovered his body. Dr. Howard Kornfeld, a pain and addiction specialist, was reportedly present as well.

Sources also reportedly told the newspaper that Prince had received emergency treatment for withdrawal symptoms on April 15, which was less that a week before he died, and that he worked to appear calm but "grew increasingly agitated in the following days."

On April 20, a "source with knowledge of the investigation" said, the musician was reportedly given intravenous treatment at a local hospital, although it's not yet known whether that happened before or after the doctor reportedly treated him for withdrawal at his estate.

A source also claimed to the Star Tribune that the highly addictive painkiller Percocet was present in Prince's system when he died, and that other pills were allegedly found at the death scene.

The Star Tribune's account of the events leading up to the death of the beloved musical icon paint a picture of concerned staff members, medical professionals, and other friends and acquaintances working to help Prince deal with an opioid addiction before he died. Although reports indicate that he may have been experiencing withdrawal symptoms or even taking addictive drugs, it's important to remember that authorities have not confirmed these assertions.