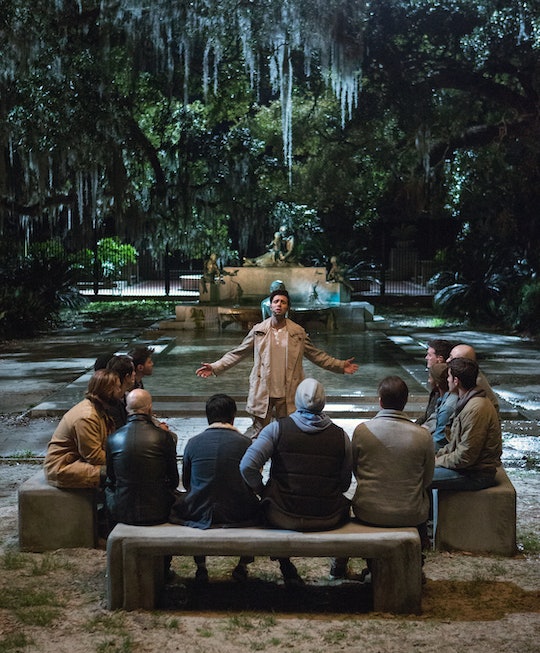 New Orleans Was The Real Star Of ‘The Passion,’ & Here’s Why

On Sunday night, Fox took on the unwieldy task of airing a live musical production based on the final hours of the life of Jesus Christ — from the last supper to his crucifixion and resurrection. And, while audiences looked forward to the ambitious production of The Passion, with Tyler Perry as host and a cast featuring Trisha Yearwood (Mary), Jencarlos Canela (Jesus), Chris Daughtry (Judas), and Seal (Pontius Pilate), it was clear from the first moments of the musical that the city of New Orleans was the star of The Passion. Everything from its people, to the food, and — of course — the incredible architecture and feeling of the city were all well represented throughout the production.

For starters, the musical version of The Passion aired live from New Orleans, with city native Tyler Perry playing both host and narrator in front of a live audience from an outdoor stage at Woldenburg Park — just steps from the banks of the Mississippi River, according to Deadline. But the story didn’t stay in that one location; the production incorporated both live and pre-taped scenes from several sites throughout the city. So in many ways, New Orleans was as much a character in Fox’s retelling of the famous story as any of the main roles.

Tyler Perry says this better than anyone, but it’s a city that resurrected itself. It rose again after Katrina. We went there and the people of the city were so welcoming and wanted us to bring the show there.

And so, as Jesus took the emotional journey from the last supper to his crucifixion, the production team took viewers literally through a tour of New Orleans. Jesus and his disciples traveled through the “modern-day Jerusalem” via streetcar and eventually got loaves and fish for their last supper from a local streetcar vendor (though some online pointed out that the group could have made a slightly more authentically NOLA choice for their last meal together).

At one of the story's crucial moments, Jesus even prayed for guidance in one of the city’s iconic raised cemeteries.

But where the Fox production truly departed from prior live events — and the best evidence that New Orleans was the real star of the evening — is in the authentic voice of the people of New Orleans. Instead of depicting Jesus carrying the heavy wooden cross through the city as he headed to his crucifixion, the execs enlisted the help of hundreds of NOLA residents to carry a 20-foot-long illuminated cross from Champion Square, through the French Quarter, to Woldenburg Park. At the same time, Fox reporters conducted live interviews with members of the audience during the production to get their reactions to the powerful retelling. The audience even became part of the show during Jesus’s trial: when Pilate asks the crowd whether Jesus’s life should be spared, the crowd yelled “Crucify him! Crucify him!” just as they might during a church production.

Airing a live production in the middle of a bustling city was an ambitious decision, but after two hours of gripping, emotional musical performances, it seemed that the broadcaster's gamble went off without a hitch — and Fox had all of New Orleans to thank.