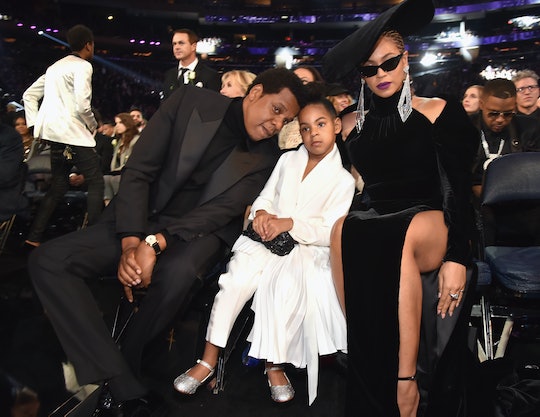 Sometimes time passes and a person doesn't even realize it, but I have a new way to measure the passage of time that might help: Beyoncé's children. Truly, this new photo of Beyoncé with her daughter Blue Ivy looking all grown up and exactly like her mother is going to hit you square in the chest that time has passed at an alarming rate. But it will be OK because we still have little Rumi and Sir being very small children for several years to come.

To be fair, Blue Ivy is still only 7 years old and just happens to look more grown up in a new picture. It seems she was at a New Year's Eve party with her mom and dad, rapper JAY-Z, as well as "Hot Girl Summer" singer Megan Thee Stallion. The singer shared a photo of herself posing with Queen Bey and the miniature Queen Bey known as Blue Ivy on Instagram. Now Blue Ivy is obviously no stranger to glitzy parties with her parents. In fact, she's become something of a regular fixture at awards shows and was even her mom's date for the premiere of The Lion King. Which made sense since she did provide some of her vocal talents for her mom's hit song from the movie called "Brown Skin Girl."

Despite the fact that she's been seen so often with her parents, the sight of her looking so grown up with her mom was a bit of a shock to the system. I'm not sure if it's her straightened, chic hair, or the look of composed confidence on her face. But Blue Ivy suddenly seemed like a grown-up in this picture and plenty of other people noticed as well. One social media user noted on Meg Thee Stallion's post, "Omg Blue looks just like her mama," while another wrote, "Why is Blue a woman?"

Why indeed? It seems like just yesterday when she was a little 2-year-old toddler like her twin brother and sister, Sir and Rumi.

Beyoncé opened up about her life as a mom with Blue Ivy and the twins in an Elle interview earlier this year, admitting that she finds the whole work/life balance thing "stressful" just like other moms. So how does she deal with that? Judging from this picture of Blue Ivy hanging with her mom and other celebrities on New Year's Eve, it looks like she simply does her best to blend the two.

No wonder Blue Ivy looks so calm and composed in this picture; she knows her mom makes her a priority. Also her hair looks amazing.