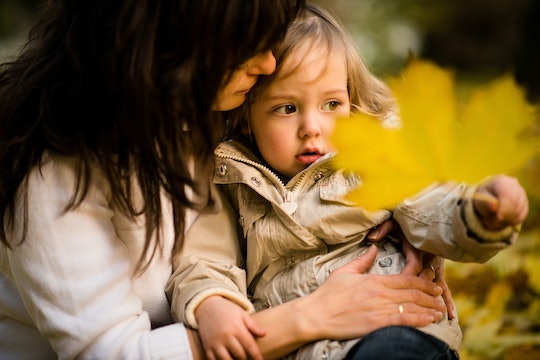 Parents Spend *A Lot* Of Time Worrying About Their Kids, New Research Confirms

A new study may help explain why you had trouble this morning brushing off that wisp of anxiety as you kissed your kid goodbye: The amount of time parents spend worrying about their kids is the about the equivalent per week of a full-time job, and new research confirms it.

According to a new survey involving 2,000 parents conducted by OnePoll along with the Lice Clinics of America, as recently published in the New York Post, the true amount of worry that comes with being a parent is absolutely more than you might think. Breaking it down into hours, according to New York Post, parents were found to have spent a whopping 37 hours a week worrying about their children.

That's five hours and 18 minutes a day fretting about little ones, adding up over the week to practically the same amount of time you spend working at a job. No wonder so many parents, including myself, joke that they have a Black Belt in worry! In fact, as reported by the New York Post, 59 percent of participants admitted that the worry can get the best of them, leading to a lack of sleep.

What exactly has today's parents so concerned? Their children's safety and happiness were the top issues, as the survey found, with worries over bullying proving to be a common thread.

And while celeb moms like Jessica Alba (who recently became a three-timer with the birth of baby Hayes, adding to a brood that included daughters Haven and Honor, as Hello! Magazine reported) make staying fit and healthy look easy, I had no idea that so many parents out there were worried about their kids' lifestyle. A surprisingly high amount of parents polled in this latest survey — 95 percent — noted that they were specifically concerned about their child’s physical health, according to Yahoo! News.

Clearly, the new study is onto something: A recent segment of The View featured all the hosts discussing the findings and their own parental woes, from teething with a baby to wondering where your kids are when they're grown:

With fall in full swing, according to Yahoo! News, parents surveyed also reported that back-to-school season is a time when fears increased; 71 percent admitted their worrying were bigger on the first day of school. Other things parents reported fretting about included how well their child will be able to fit in (No. 6 on a list of worries), how easily they’ll make friends (No. 9) and whether or not they are getting good grades (No. 5).

Of course, as the study was commissioned regarding lice, 27 percent of parents admitted they were freaked out about kids come home with the dreaded nits. (And once you've been through that one, their worry makes sense. Use rosemary oil, people. Your kid smells like an Italian restaurant, who cares?)

With all these topics churning around in a mom or dad's mind, it's little wonder that 54 percent of those surveyed admitted that being a parent is harder than they thought it would be, according to the New York Post. To top it off, as the study found, nearly half of respondents (48 percent) have felt judged by other parents.

So let's break this down: Between being worried about your kids, or being worried about what other parents think of either you or your kids, the average American parent just can't chill. And worse yet, the worry never seem to go away no matter how how old your child gets, as a humorous Twitter celebrity exchange from last year shows.

Apparently, even when you have an adult child who's rich, famous and doing fine, you still worry. Just ask Seth Rogen's mom, Sandy Rogen:

To which Seth Rogen replied:

So come on, people, let's use this daunting data to make a decision to try calm down just a little and take everything day by day. I'm right there, with three precious kids of my own — and there's enough stuff with all the ages and stages to worry all day if I wanted.

But I think it's worth taking a minute to reflect on whether some of our worries can't be right-sized a bit. The kids are doing all right so far, and things usually work out in the end, don't they? After all, even Seth Rogen's mom thinks so, even if she had to hound him a little bit...