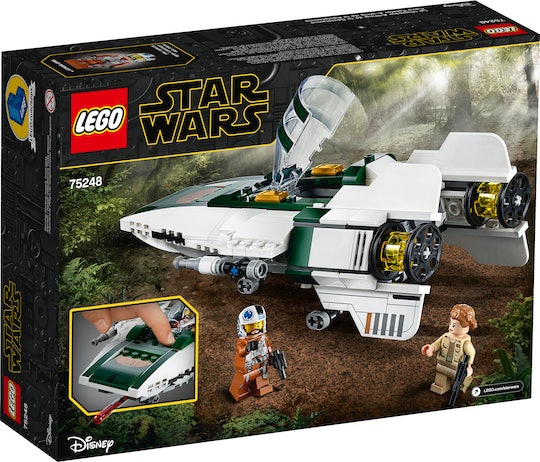 The New Star Wars LEGO Sets Are Here, But They Probably Won't Be For Long

Fans are ready for the newest Star Wars Universe (SWU) movie The Rise of Skywalker, as well as the series The Mandalorian on Disney+. And they're really ready for the new Star Wars LEGO sets, here just in time for the fall releases. Everyone will want to get their hands on these blocks.

Followers of the SWU are always anxious to see what awaits the Rebellion and all of the accompanying merch. From droids to craft projects, the SWU has the best gear. A perennial favorite is the kits put out by LEGO, which seem to get bigger and more elaborate for every SWU movie and show. This year might top them all.

LEGO is releasing a whopping eight new sets to celebrate The Rise of Skywalker and The Mandalorian, and, according to a press release the new sets will range from $20 to $160 and will be in stores on 4 October. LEGO said that "These sets add to the LEGO Group’s continued celebration of the 20th anniversary of the beloved LEGO Star Wars range that continues to unite fans of all ages around the globe."

And also add to my increasingly large collection of LEGO sets that I build and display for myself, without allowing my children to do more than hand me a LEGO or count pieces, and yes, I realize, I am Lord Business. I don't care.

Holy crap, is this collection ever impressive. There are new characters, new fighters, ground transportation, and outposts, all available thanks to the epic genius talent at LEGO and Disney. And you are getting a lot for the money this time around. For example, the Pasaana Speeder Chase kit is under $40, and according to LEGO, it comes with SWU Lego characters, including 3 minifigures: Rey, a First Order Jet Trooper, a First Order Treadspeeder Driver, and also a BB-8 droid LEGO figure. As well as the Transport speeder, and a side cab and blaster. That is hours of fun for anyone, even the children if you're feeling particularly generous.

But I'm not going to lie. The kit I'm most excited about is the new Y-Wing Fighter. Yes, you read that right, Y-Wing. It's a sneak peak into the new planes of The Rebellion, and I am loving every little block. The kit itself is impressive. It's $70 for 578 pieces, and includes the following LEGO SWU characters: Poe Dameron, Zorii Bliss, First Order Snowtrooper minifigures, and a D-O and astromech droid, as well as the Star Wars Resistance Y-Wing Starfighter, a.k.a. "wishbone," which has, as per the press at LEGO, an "opening minifigure cockpit, folding landing gear, two spring-loaded shooters and top-loaded bombs with trigger-activated release," as well as a cache of weapons.

And just to be extra and goth (and also extra goth) LEGO has made Kylo Ren's shuttle into a LEGO set. It's bold, it's dark, and it really makes me feel like I, too, might want to take a short jaunt to the Dark Side. After all, they really have the best outfits. This set has over 1000 pieces for $120. The Kylo Ren shuttle kit in the new Star Wars LEGO sets is amazing, but you shouldn't forget the Mandalorian set.

The Mandalorian set comes with an AT-ST Raider, four minifigures, three blaster rifles and a blaster. It is 540 pieces for $50... which is a pretty great deal.

All of these kits are going to be absurdly popular for the holidays, so before you find yourself on the wrong end of eBay, make sure you get them as soon as they're released, if they are something your kids could be into. Or maybe, just for you, fellow Lords Business.