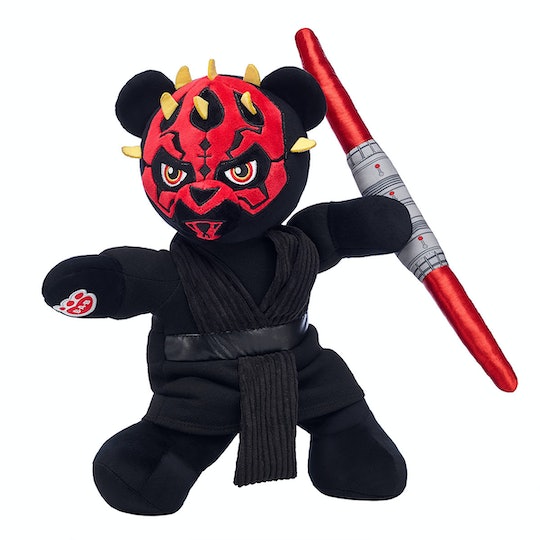 This Darth Maul Build-A-Bear Is So Cute, Even You'll Join The Dark Side

OK, so there are Star Wars fans and there are (insert all emphasis here) Star Wars fans. If you fall into the latter category, then there's a good chance the new Star Wars Darth Maul bear being added to the Build-A-Bear Workshop Star Wars line is basically the most exciting news you've heard all week. Maybe you can quote Yoda in your sleep and you frequently eschew "destiny" or "fate" in favor of the everlasting guidance of The Force, but to pass along your love of the films to your little one? Oh, that's the best reason to head to Build-A-Bear for a snuggly Darth Maul.

Just in time for the Dec. 20 release of Star Wars: The Rise of Skywalker, Build-A-Bear Workshop will release the Darth Maul Bear Gift Set ($56) on Oct. 4. The Darth Maul bear will join the rest of the Star Wars line, which already includes a Kylo Ren Star Wars Bear, Rey Bear, Stormtrooper Bear, Chewbacca Bear, and even a mini R2-D2.

Bet you never thought Darth Maul could be kind of cute, right? Well, while it may still be an evil Sith Lord, your Star Wars-loving kiddo will love this bear's furry red and black face, as well as the signature black suit the character wears in the films. The bear also has a Star Wars logo on its paw pad. Since the stuffed animal is part of a gift set, it also includes some extras, including Darth Maul's signature red lightsaber. And, yes, it lights up and makes sounds.

While you are shopping around for cuddly Star Wars gear, you might also want to check out the rest of the line, which includes this Stormtrooper Bear ($35) that you can accessorize by adding a Stormtrooper Blaster ($12).

Make sure you also grab the most adorable Wookie ever, the Chewbacca Bear ($35). Because, well, he's too darn cute to pass up. Plus, you can add a Chewbacca sound ($7) to your bear, giving it a completely authentic voice.

There are also some accessories you'll want to check out, like the Praetorian Guard Costume ($18) — a red, two-piece outfit — and a totally official-looking four-piece Rey costume ($11.50), complete with a vest, pants, and detached sleeves.

If you already have a Build-A-Bear friend at home, then you can dress them up in any of these looks and create your own stuffed-bear-Star-Wars fun at home. Or just score one of these bear-sized Star Wars t-shirts ($5) and pair it with a blue lightsaber ($12) to get your bear in on the fun.

Then again, if Star Wars isn't your thing, then you can always treat a favorite kid in your life to any of Build-A-Bear Workshop's numerous stuffed animals that range from cats to unicorns to PAW Patrol to a rainbow striped sloth ($16). Clothing ranges from everyday dresses and outfits to character-themed gear, like Lion King, Toy Story, How To Train Your Dragon, and My Little Pony.

Seriously, there's something for everyone. And if your kid is looking for a cuddly friend to take to the next big Star Wars premiere, well, then it would seem you've found a match.