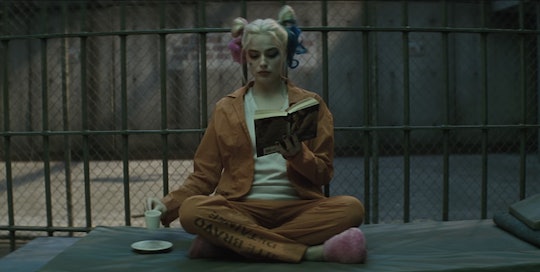 This year's MTV Movie Awards have taken on a particularly unique format, with the awards show being pre-taped on Saturday night across several locations throughout the Warner Bros. studio backlot before airing on Sunday night. With MTV's announcement of exclusive new footage, fan reactions to the new Suicide Squad preview were absolutely nuts. According to The Los Angeles Times, fans rushed the barricades, nearly knocking them over as four of the film's stars — Cara Delevingne, Jared Leto, Will Smith, and Margot Robbie — arrived to introduce the sneak peak footage.

Warning: Possible Suicide Squad spoilers ahead... proceed at your own peril. The Blitz trailer is so awesome it's totally worth watching to get yourself even more hyped for the next big DC Extended Universe movie after March's Batman v. Superman: Dawn of Justice.

The Blitz trailer treated fans to everything from Joel Kinneman as Rick Flag whipping the rag tag group of crazy supervillians into line, to Robbie absolutely slaying it as Harley Quinn — there was even a pretty intense looking confrontation between Smith's Deadshot and Jay Hernandez as El Diablo. And if fans were ready to riot Saturday night on the Warner Bros. studio backlot, Twitter blew up once the Suicide Squad "Blitz" trailer finally aired on Sunday night. The general consensus seems to be that Suicide Squad looks like it's going to be absolutely off the wall — fans were seriously blown away by all of the awesome contained in the minute and a half long clip:

Only 116 more days until when Suicide Squad comes out — but if the fan reactions are any indication, I'm not so sure if everyone is going to be able to keep it together that long!