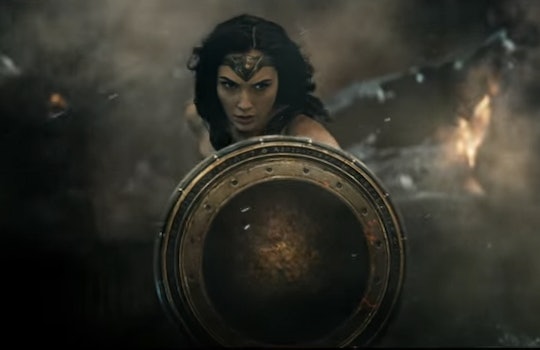 Okay, so I don't want to come across all "crazy fan girl" here but, Oh. My. God. I love Wonder Woman. Every girl should love Wonder Woman, I think. She is a goddess and a princess and a superhero. What other heroine out there can say that? No one else, that's who. As if it wasn't exciting enough that the new Batman v Superman movie is virtually on our doorstep, it turns out there's renewed chatter about the impending Wonder Woman movie, set to be released in the summer of 2017, thanks to a new 'Wonder Woman' promotional photo, which was released on Thursday, much to the delight of fangirls and boys everywhere.

A little background here for any newbies: the Wonder Woman film is based on a DC Comics series, originally written by a psychotherapist who specialized in feminist themes. Wonder Woman started out as Princess Diana (for reals), or, as the rest of us humans know her, Diana Prince. She was part of an Amazonian tribe of women living away from the carnal gaze of men and just essentially hanging out in awesome togas or kicking ass in equal measures. Then, a pilot accidentally crash lands on the island and Diana falls in love, follows him back to America (natch), and starts kicking more ass than before (on account of how peaceful life was with no dudes around, you know?).

The new movie (which fans have been asking about for the past 7,000 years or so), will likely prove to be just as exciting as the comics: Fans will be transported back to the island of Amazon warrior princesses to meet the badass chicks who trained Diana. Here's how they look:

Diana's mother, Queen Hippolyta will be played by Connie Nielson (Gladiator) and if that's not wonderful enough, she's also going to have two super militant aunts to train her, General Antiope (House of Cards' Robin Wright) and her lieutenant, Menalippe (Force Majeur's Lisa Loven Kongsli). Diana is basically the luckiest girl who ever lived — the only child of a bunch of super strong warrior women who they plan on training to become the greatest female warrior of all time. Jealous!

And what is everyone else saying about this exciting new development?

I'm not playing favorites here, but get a gander at Robin Wright. She looks like she's ready to slay, like, right this minute. And how fabulous is it that these women are "of a certain age" and Hollywood is still letting them kick it? Could it be that we are finally becoming an enlightened species? Is that possible?

Could Wonder Woman have actually saved us for real? I say we all call in sick to work on opening day for the next movie, strap on a cape and go celebrate being badass feminists. Who's in?