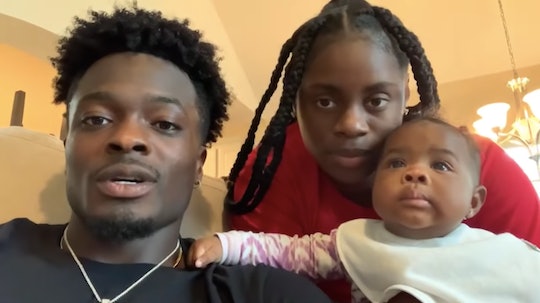 As many professional football players prepare for the upcoming season, one won't be joining them for good reason. In an emotional and honest YouTube video, NFL star Marquise Goodwin shared that he's opting out of the 2020 season to protect his wife and baby daughter amid on the ongoing coronavirus pandemic.

On July 28, the Philadelphia Eagles wide receiver sat down to share his official statement with his fans on YouTube, explaining that he would not be dressing for the 2020-2021 season because he is putting his family first, something he said he didn't do three years ago and it was "a decision that affected my whole life."

As he was playing for the San Francisco 49ers, Goodwin's wife Morgan Goodwin-Snow suffered a miscarriage when she was 19 weeks pregnant with their son in 2017. "I chose to leave my wife at the hospital after prematurely birthing our first baby due to an incompetent cervix, which resulted in a fatality, to play in a football game," he explained in the video. "I felt like I had to prove to my coaches and new team that I was dedicated to winning, and I wouldn't let anything keep me from that goal, not even my family."

Sadly this wasn't the last time Goodwin-Snow would suffer a miscarriage; just one year later she lost their twin boys while he was on the road. "We lost our twin boys," Goodwin said in the video. "We have three angel babies to hold and watch as their little heartbeats grew more and more faint by the minute until it stopped."

The couple welcomed their first daughter Marae in February 2020, according to NBC News.

"Onward to February, our lives were changed for the better as we finally were blessed to bring home our first living child, our rainbow baby. This right here? This is my reason, y'all," Goodwin said. "She is the reason I'm opting out for the season. After choosing football so many times, I feel like I'm inclined to make the right decision by finally choosing my family first. And that's real talk."

"I won’t take the chance of experiencing another loss because of my selfish decision making. I can’t do it," he added. "It’s not something I’m willing to live with. Therefore, I’ve chosen to opt out of playing only for this season or until medical professionals across the world all agree that the world is a safe environment for everyone and not just NFL players."

Many people praised Goodwin's decision. "We understand bro," one commented on YouTube, while another said, "Life means more then [sic] Sports. Good luck in your future and wishes for your family covid is no joke."

A few, however, criticized his decision, prompting Goodwin to address the backlash. "I’ve gotten so many messages and @‘s from 'concerned' fans telling me how stupid I am and that this COVID-19 isn't that serious... I bet my bank account that there are 150k dead people that would argue different," he tweeted on July 29.

In the wake of Goodwin's decision to step back from the 2020 season of football, CNN reported on Sunday that Philadelphia Eagles head coach Doug Pederson tested positive for COVID-19.

"FAMILY OVER EVERYTHING! I stand firm on what I say. I MEAN WHAT I SAY! I DO WHAT I SAY!" Goodwin tweeted. "#FOE not just some word play for me, but real action. I finally had to prove that to myself."