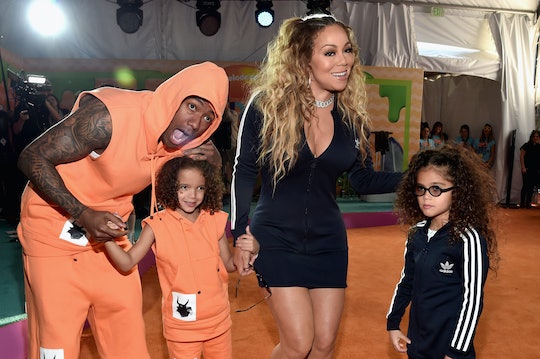 If you want to learn a thing or two about how to tackle this tricky thing called parenting, just look to co-parenting pros Nick Cannon and Mariah Carey at Nickelodeon’s 2017 Kids’ Choice Awards for inspiration. Although the parenting partners famously split in 2014, they often prove that there's no bad blood between them and have managed to create a loving balance for their kids. On Saturday, they hit the awards show with their 5-year-old twins Monroe and Morocco — nicknamed ‘Roe and ‘Roc respectively — and their heartwarming family dynamic at the event's orange carpet is almost too much to handle.

For starters, they planned color coordinated, matching ensembles. Carey and their daughter ‘Roe donned navy zip-up dresses with their hair styled with waves and pigtails. Meanwhile, Cannon and their son ‘Roc wore matching orange cut-off sweatsuits and Timberland-like boots with Nickelodeon's splat logo on top — a fitting choice considering that Cannon is the current chairman of TeenNick and has been with the network with years, according to People.

Co-parenting is a tricky equation to crack — parenting in general is difficult — but seeing Carey and Cannon tackling it so beautifully once again is a refreshing reminder that it can work and this photo proves they were co-parenting pros at the Kids' Choice Awards.

Ahead of the awards show, Cannon told Entertainment Tonight that his ex-wife is a "queen" and a "magnificent mother."

"That woman is a queen," Cannon told Entertainment Tonight of Carey. "She's a magnificent mother."

He continued, "I have nothing but respect and admiration for that woman. I will never have a bad thing, a negative thing, to say about her."

It'd be impossible to assume that it's always rainbows, butterflies, and orange runways for them. In fact, they've acknowledged how difficult it can be as Cannon himself grew up in a blended family and admitted that to make it work, there has to be love and respect and understanding that the kids' happiness comes first.

"A lot of times, when you think about breakups in relationships, it’s usually over ego," Cannon told Entertainment Tonight last month. "And if you can remove your ego from that, and make it about your loved ones, that's what it's all about."

He continued, "You put the kids first, but then when you understand that you have unconditional love for these human beings and you want the best existence for them, then you put whatever differences you may have had aside."

Cannon, who recently welcomed another baby boy with Brittany Bell, has been very outspoken about the loving family dynamic the ex-partners wanted to have after their split, while Carey often posts photos of her kids (and Cannon) on her Instagram.

Breakups are messy and are tough on everyone, especially kids. But it's pretty incredible to see yet again that these two can co-parent without any drama and have managed for years after their divorce to be a part of their children's lives together.