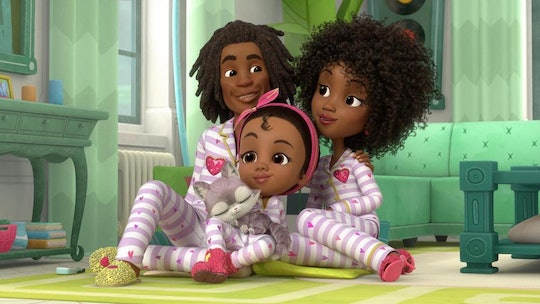 An 8-year-old aspiring fashion designer, two cool parents, and one spunky cat will all be featured in Nick Jr.'s brand new preschool series Made By Maddie that's set to air on the network later this month.

Made By Maddie, which was formerly known as Fashion Ally, tells the story of an 8-year-old girl named, you guessed it, Maddie, who lives in New York City and dreams of becoming a fashion designer like her mom Dee. Maddie's dad Rashad also has a cool job as a musician. And, of course, there's Maddie's cat, Cashmere.

"Maddie finds design inspiration around every corner," Nick Jr. said in a press release, adding that the 8-year-old's mom, dad, friends, and neighbors are always there to help make her "big ideas ... become a reality."

"Maddie’s creative thinking and dazzling designs are a reflection of the bustling, colorful city of New York and its residents," Nick Jr. said. "Maddie confidently embraces her own unique style, celebrates individuality, treats everyone with kindness, and encourages others to take risks and be themselves."

The first episode of the 22-episode animated series airs on Sunday, Sept. 13 at 11 a.m. ET/PT on Nick Jr. Following Made By Maddie's premiere, 30-minute episodes will air regularly on Sundays at the same time.

Maddie is voiced by 10-year-old Alyssa Cheatham, who's starred in Collateral Beauty. Maddie's mom Dee is voiced by Patina Miller who's known for her roles in The Hunger Games, All My Children, and Madam Secretary. And James Monroe Iglehart, who's starred in the Broadway productions of Aladdin and Hamilton, lends his voiced to Maddie’s dad Rashad.

Beyond those names, Made By Maddie will also feature some pretty amazing special guest voices including Karamo Brown from Queer Eye, Joe Fatone of 'NSYNC, professional chef David Burtka, and Al Roker of the TODAY show to name a few.

But what's even better is that Made By Maddie offers some awesome representation. For one, Maddie is a confident young Black girl with friends from all different backgrounds. As one excited Twitter user wrote, they are "here for the positive representation!"

After decades of lacking representation of Black voices in children's programming, Made By Maddie offers a refreshing sign of more diverse and fun content to come.