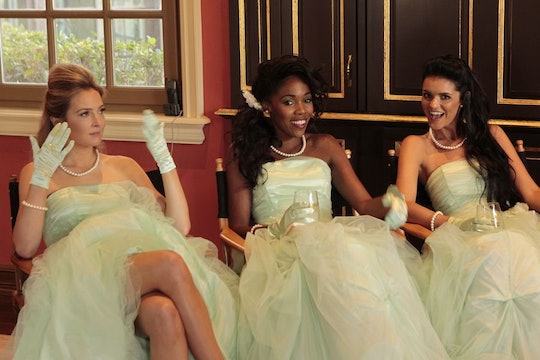 Jasmine Got Real With Nick On 'The Bachelor'

I think we can all agree this has been a particularly interesting season of The Bachelor, not just because it gave us the gift of Corinne (possibly the best "villain" in Bach history), but also due to the fact that there have been no shortage of dramatics when it comes to every little thing. Obviously you expect that to some degree, but Nick eliminating Jasmine on The Bachelor during the latest group date was not only surprising, but totally awkward. The entire time.

Jasmine, who never got the chance to lay claim to an ever important one-on-one date with the Bachelor himself, was eliminated during a group date on Monday night when Nick decided pre-rose ceremony that she had to go. She'd spent the better part of the day talking to everyone who would listen about how much she regretted never getting a one-on-one date yet and always being chosen for group date excursions.

Until now, Bachelor viewers haven't seen too much of Jasmine, but during Monday night, things were different. She got to go on a group date with Nick and some of the other women. But afterward, Nick took her aside and eventually decided that he would be sending her home ahead of the rose ceremony. It should be noted that this was all after Jasmine riled herself up all evening about never getting a one-on-one, as it seemed like Nick chose each other woman to step away with, other than her. By the time she got some time with Nick, it was doomed.

Pretty much the entire day, Jasmine's temper was being tested as the group date progressed and then imploded on itself. All of her complaints to not only the camera, but the other women simply foreshadowed what was going to go down with Nick by the end of the evening.

The biggest shocker, though, was that the catalyst for Nick sending Jasmine home on The Bachelor seemed to be her hand wrapping around his neck in a faux choke hold as she kept talking about wanting to choke him out. I think we can all agree that this behavior was very much alcohol-fueled though and it wasn't unlike the kind of behavior Raven had described to Nick regarding the anger she showed toward her cheating ex-boyfriend with the stiletto. But instead of sending Raven home after hearing the story, he kept her around and was touched she was so open with him about it. When it came to Jasmine on The Bachelor though, Nick eliminated her after that kind of behavior. It could have been because Jasmine's behavior was directed specifically at Nick, putting him off and worrying him overall. I suppose we'll never know for sure.

Unfortunately, this is the end for Jasmine, but the fire she showed before she left The Bachelor for good might be exactly what producers needed to keep her in mind for Bachelor in Paradise. You never know!