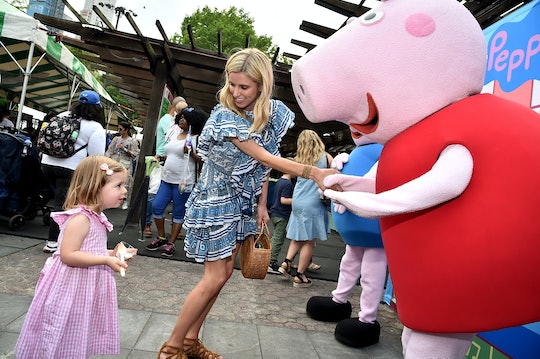 I know from personal experience that Peppa Pig is not everyone's favorite show, especially if you're a parent who has to endure hours of it on loop. But here's the thing — kids really, really love it. And considering children aren't going to give up on this trend anytime soon, why not embrace it as Nicky Hilton did recently? Instead of shying away from the popular show, Nicky Hilton threw a Peppa Pig birthday party for her oldest daughter, Lily-Grace. The bash was a delightful homage to the pig herself, and it was surprisingly beautiful. I mean, Peppa's color palette is a universally flattering pink so I'm not sure why I'm surprised.

Nicky Hilton and her husband, James Rothschild, have welcomed two children since their wedding at Kensington Palace in 2015: 3-year-old daughter Lily-Grace and 19-month-old daughter Teddy. Considering the two little girls are part of two of the most recognizable names in American culture, it arguably makes sense for their parties to look like miniature adult galas. Little Lily-Grace' party, however, was a little bit of Column A and a little bit of Column B. A beautiful spectacle sure, just Peppa Pig-style. Which is so much better.

The birthday party in question was held at the Bel Air home of Lily-Grace' grandmother, Kathy Hilton, who enlisted the help of OC Balloon Bar to transform her living area into a pink dream, according to Bravo TV. There were life-sized Peppa Pig-themed balloons on hand to welcome both child and adult guests alike into the home, while the ceiling above was covered in a sea of different shades of pink.

Nicky and her daughter wore matching tiered dresses in pink and white to celebrate the big occasion, and let's please not forget the tiered trays of cupcakes lining the dining room table as well as macaroons and a Peppa Pig cake to top it all off. Color me impressed.

Unsurprisingly, there were plenty of famous guests on hand to wish the birthday girl a happy day. Peppa Pig herself reportedly made an appearance as did Princess Elsa from Disney's Frozen, and there were other famous people like Kathy Hilton's sister, Real Housewives of Beverly Hills star Kyle Richards, interior designer Faye Resnick, and Lilly Ghalichi on hand to wish Lily-Grace a happy birthday. It's possible all of these celeb guests wanted a gander at Peppa Pig herself too, although I have no way of knowing for sure.

It's unclear whether Nicky's famous older sister, Paris Hilton, was also present, but I think it's safe to say Lily-Grace and her little friends went gaga over all of the Peppa Pig paraphernalia. And speaking of going gaga, this party created quite the buzz on social media.

"These peppa pig cakepops are sooooooo cute," one person wrote. "Happy Birthday to your lovely girl."

Someone else joked: "I want a peppa party next year."

"Looks like a little girl’s dream!!" one person wrote. "Actually kind of my dream party at 35 lol."

Maybe I'm a sucker for an expertly planned party, but Lily-Grace's bash looked amazing, even if you aren't an actual Peppa Pig fan. And you got to give Nicky props for making her daughter's birthday dreams come true. Happy b-day, Lily-Grace!