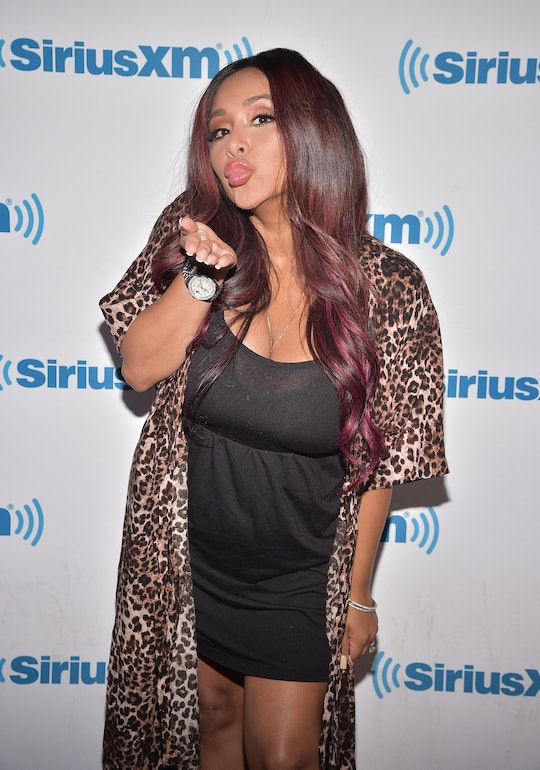 Every so often, a parent might need to kick back with the beverage of their choice just to get through this whole parenting thing. Nobody appreciates this sentiment more than Nicole "Snooki" Polizzi, who has affectionately dubbed her occasional vino "mom juice." Unfortunately, some people take issue with moms treating themselves to alcohol, especially breastfeeding moms. But don't worry about your favorite meatball because Snooki will clap back at any mom-shamer who questions her love of wine. Spoiler alert: I'm with her on this one.

On Saturday, the MTV personality shared a hilarious photo of herself and youngest son, Angelo, having a drink (granted, Angelo's "cocktail" of the day was just breastmilk). The photo showed Snooki masterfully holding her son, bottle pressed to her cheek to hold it up, while sipping from a glass of red wine. She joked in the caption, "'What's mom life like with 2 kids and a newborn?' THIS." Many fans agreed they felt totally seen, with some even praising Snooki's "Pure talent." One commenter, however, seized the opportunity to shame her for drinking while she's still nursing her baby boy. The good news? Neither the mom-of-three or her fans were here for the shade.

So, what was the fan's exact comment? They said: "[You're] not suppose to drink alcohol if [you're] breastfeeding your baby."

As for Snooki, she quipped back, "You're not a mom. I allow myself to have a few glasses once a week to stay sane with 3 kids. I do what's necessary to clean my milk for my baby. Let a mawma live and keep being 17."

Sadly, Snooki is no stranger to these type of comments online, which is probably why she's so good at dealing with it TBH. Just one example? In June, just days after the arrival of her third son, she was slammed for posting about wanting to dive back into her workout routine right away. According to Hollywood Life, Snooki was quick to hit back at people accusing her of being self-conscious about her "mom body," or rushing back into normalcy. She amended her post to include an edit, asking critics piling on her to back off.

"EDIT: Receiving backlash because I can't wait to get in the gym and get fit again? Everyone is entitled to their own opinion, but don't attack me for wanting to become strong and fit again after my pregnancy," she wrote, according to the outlet.

Snooki continued, "My boobs are leaking and pulsating, my butthole is sore and my cramps are unbearable & I'm still wearing a diaper the size of Texas. Postpartum is a b****. But I'm allowed to look on the bright side of things and want to get back into shape. Don't punish me for that."

Months earlier, she was bashed for using a stroller for son Lorenzo and daughter Giovanna during a trip to Disneyland. Fans took issue with the size of the strollers, as seen in her Instagram photo from the trip, as well as the fact that Snooki's kids are "too old" to be in one.

"Omg my kids would never be in a stroller that big," one Instagram user commented. "3 kids. And have done Disney 3 times. If you're over 2, your walking. And I've never lost anyone."

Another added, "Them kids to dam big for strollers."

"It's time to make them kids walk lol," a third said.

One Instagram user even brought up Disney's new stroller policy, which bans the use of stollers larger than 31 inches wide and 52 inches long, according to TODAY.

The shaming prompted a response from Snooki, who was quick to shut her haters down. "They walk!" she wrote in the comments. "But in large crowds I prefer they sit their *sses down. Save me the stress of not losing my offspring." Seems like a good enough reason to me.

In short, if you don't have anything nice to say, it's probably a good idea to zip it. And if you're thinking about telling someone how to parent, don't, especially when it comes to Snooki. Don't mess with "mawma," folks.