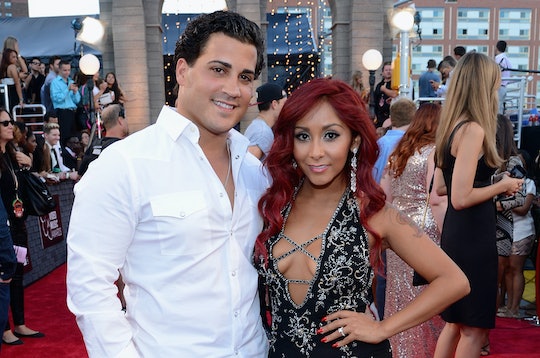 The newest addition to the Jersey Shore family has finally arrived. Start fist pumping and prep some "Ron Ron juice" because Nicole "Snooki" Polizzi has given birth to her third child, a baby boy, so it's time to celebrate. In the words of DJ Pauly Delvecchio, "yeah buddy!"

Polizzi confirmed the exciting news in a statement to People on Thursday, May 30. "So thrilled to welcome baby Angelo into our little family! He is so sweet and a spitting image of Lorenzo as a baby,” a rep for 31-year-old Polizzi told People. "Jionni and I can’t wait to see how being outnumbered turns out!"

The birth announcement also revealed their new baby boy's full name is Angelo James LaValle and he arrived at 2:30 a.m. on May 30, weighing in at 7 lbs, 8 oz. And his first photos shared on Snooki's Instagram are so cute.

Polizzi, her husband, Jionni LaValle, and their two kids — 6-year-old son, Lorenzo, and 4-year-old daughter, Giovanna — are undoubtedly ecstatic about the newest addition to their family. This news is not only exciting for their little family, but it's super exciting for fans who, like Snooki herself, have been waiting anxiously for months for baby Angelo to arrive. And TBH, it feels like it was just yesterday that Polizzi announced she was expecting her third child, when it was really just in November 2018. But now all the waiting is finally over and her little meatball is here!

There weren't too many surprises to learn about her third baby. In December, Polizzi announced she was having a boy with a party where her son hit a baseball to reveal the baby's sex, according to Cosmopolitan. And in April, Polizzi shared on Instagram that they decided to name their son, Angelo, when she was gifted customized baby items with his name, according to People.

And now that her son is here, you shouldn't expect her to take too much time off from building her brand and being a total boss "mawmaw" (in the words of Polizzi). She told People in March that she actually won't be taking maternity leave, at least not much. "That's not a thing," she told the magazine. "I'm probably going to take a couple of days off but my mental state is always thinking about work and my brand, and expanding it and improving it and making it better."

Considering that Polizzi runs her own boutique, the Snooki Shop, while still having plenty of time to spend with her kids, it's likely that she doesn't need to take maternity leave in the traditional sense.

Though the new parents will undoubtedly have their hands full with three kiddos at home, it's unclear if this will be Polizzi and LaValle's last child or if they're ready to make more meatballs in the future. Over the past two years, Polizzi had been open about trying for one more kid, according to Entertainment Tonight, but she didn't disclose how many kids she wanted.

Baby Angelo sounds like such a sweet baby, and now that he is finally here, hopefully Snooki will keep Jersey Shore fans updated on #MomLife with her newborn.