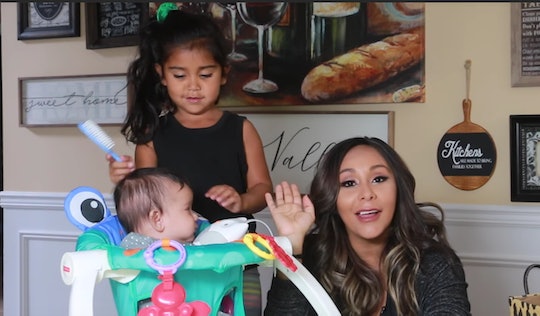 Prepare to say your final farewell to "meatball power," hair poofs, and Crocodilly because Nicole "Snooki" Polizzi announced she's retiring from Jersey Shore. The mom of two opened up about her decision to leave the hit MTV reality series in the most recent episode of her podcast, It's Happening with Snooki & Joey, sharing that she wants to prioritize family time and this current season of Jersey Shore Family Vacation will be her last.

Polizzi made the big announcement on Friday, Dec. 6 — but first she had to after pour herself a glass of wine. "I have to do what's best for me at the moment and I'm retiring from Jersey Shore," Polizzi said on her podcast that she co-hosts with her BFF Joey Camasta. "I'm not coming back to Jersey Shore for Season 4 if there is one."

Polizzi said there were many reasons behind her decision to leave Jersey Shore Family Vacation, which is currently in its third season, but the main one is because of her kids. "I just can't do it anymore. Leaving my kids is really hard for me — I try and quit every single time we film because I hate being away from the kids. I don't like partying three days in a row, it's just not my life anymore and I don't want to be away from the kids."

The reality star is the mom to three young kids with her husband, Gionni LaValle: 6-year-old son, Lorenzo, 4-year-old daughter, Giovanna, and 6-month-old son, Angelo. Polizzi was 22 years old when the show started filming; needless to say, her life has changed a lot since then.

"For me at 32 years old, with three kids, and if I'm doing a reality show, I want it to be fun and I want it to be light hearted and lately the show is not like that," she added. "I just need to do what's best for me."

Polizzi certainly has a lot on her plate. In addition to filming the reality show, hosting a podcast, and being a mom, Polizzi is also the owner of the Snooki Shop, a boutique store in Madison, New Jersey that sells clothes and Jersey Shore inspired merchandise.

While she's leaving Jersey Shore, Polizzi assured listeners that she will still be around on social media and she isn't done with reality TV for good. "I just need to move on from the show," she explained. Still, even though Snooki isn't going off the grid, her departure from the show, first episode of Jersey Shore aired 10 years ago this month, will be a tough goodbye.

More Like This
Snooki Hints That A Sunday Dinner With All The Jersey Shore Kids Is In The Works
Khloé Kardashian Shares First Look At Her Son & His Birth
Kim Kardashian Stars In Hilarious House Of The Dragon Parody, The Targashians
Lifelong Teacher Dr. Jill Biden Loves Watching Abbott Elementary Too