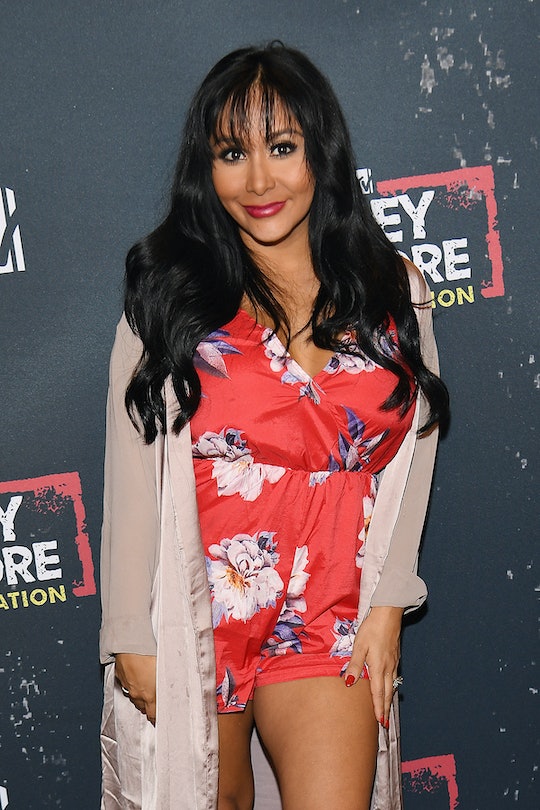 Jersey Shore star Nicole Polizzi (or Snooki, as she's known to fans of the show) is expecting a new little meatball later this year. The MTV celebrity is currently pregnant with her third child, and she is clearly so ready to meet her family's newest addition. And after watching Snooki's kids talking to her bump in this incredibly sweet video, it's beyond clear that the whole family can't wait for this little one's arrival.

Snooki's children — 6-year-old son, Lorenzo, and 4-year-old daughter, Giovanna — are obviously ready for the new baby to join their crew. They probably are so excited to have a new sibling to play with, eat with, and, you know, boss around, as kids like to do. In fact, they're already busy talking to their newest sibling.

In a new Instagram post, Snooki shared a video of her children talking to her bump, according to E! News. In the video, both Lorenzo and Giovanna can be heard taking turns "talking" to it. "Hi baby," Lorenzo says in the video, with his hand against Snooki's bump. "This is your big brother and your little sister, I mean your big sister."

But Giovanna had a more concise way of talking to the bump, putting her mouth against it and mumbling into it. And Snooki seems so proud and happy for her children to be talking to her bump. "We can't wait to meet you, baby!!" Snooki says at the end of the video.

Fans on Instagram also can't get over how sweet this moment is. "OMG soo stinkin' cute," one fan commented on the video.

Another said, "Awww he's really talking to the baby and had to correct his introduction because he's not used to sissy being a big sissy."

"This is the cutest ever!!," one more exclaimed. "Made me tear up because of how sweet and excited they are!"

If that moment wasn't sweet enough, in another video, posted to Snooki's Instagram account in the beginning of February, Giovanna can be heard (and seen) singing an original song to her sibling about how she is so in love with her little sibling. "I sing to you my best friend," Giovanna sings in the video. "I love you babyyyy."

Needless to say, this baby is already so loved.

It's not known when exactly Snooki's children will get to meet their little sibling. In November 2018, Snooki and her husband, Jionni LaValle announced that they were expecting their third child in an Instagram post on Thanksgiving, according to People. And one month later, in December, Snooki and LaValle revealed in a YouTube video that they are expecting a boy, according to Entertainment Tonight.

While Snooki has been keeping fans in the loop, she has been withholding some details, which is more than understandable. For instance, Snooki hasn't revealed her exact due date, though she is reportedly due sometime this summer.

Although there have been a lot of sweet moments, Snooki's pregnancy with baby number three hasn't been the smoothest. In January, she told Us Weekly that she's definitely struggling this time around. "I'm super nauseous, much more than I was with my other two. I just feel like every day I wake up and there's something wrong with me. My stomach hurts or I'm cranky and I can't move and just need to lay down. It's really annoying, the pregnancy. It's not my favorite," she told Us Weekly.

Whenever Snooki's family meets their newest bundle of joy, it's clear everyone's so, so ready for their littlest meatball to arrive.