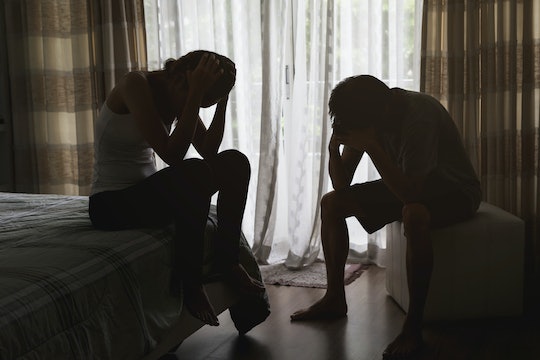 NICU Parents Are Seriously Struggling After Their Baby Comes Home

The neonatal intensive care unit (NICU) isn't exactly a place that any parent hopes their baby will end up, yet it's often an avoidable reality for families of the one in 10 infants born prematurely in the United States each year. Complications from early births mean that additional — and possibly extensive — medical care is often needed to keep babies alive and thriving, but if you've lived through it, you know that the pain involved with having a baby in the NICU doesn't magically disappear at discharge. And now there's data backing that up: a recent study found that NICU parents feel depressed and anxious when their babies go home, recognizing the fact that having a premature baby can have a big impact on parents' mental health.

According to Science Daily, researchers at Washington, D.C.'s Children's National Health System found that 45 percent of parents whose children were admitted to their NICU experienced symptoms of postpartum depression, anxiety, and stress when their newborns were discharged from the hospital. The data was presented at the the 2017 American Academy of Pediatrics (AAP) national conference in Chicago by neonatologist Lamia Soghier, M.D., whose team "enrolled 300 parents and infants in a randomized controlled clinical trial" and assess depressive symptoms and parental stress to look at the impact that the NICU experience had on parents' mental health, and found that nearly half had elevated scores on the Center for Epidemiological Studies Depression Scale (CES-D).

That finding is one that makes a lot of sense: given that the transition to parenthood can be a rough adjustment for pretty much anyone under the best of circumstances, it seems almost inevitable that parents who also had to experience the stress of an extended hospital stay, medical interventions, and in some cases uncertainty over their children's health (including whether or not they will even live), would see their mental health impacted in a negative way. But while it might seem like parents of the tiniest, most medically-fragile preemies might be the ones to show the most pronounced depressive symptoms, it turns out that all NICU parents were at risk: Soghier said that, parents of babies who were close to full-term at delivery actually had "6.6-fold increased odds of having elevated CES-D scores compared with parents of preemies born prior to 28 weeks' gestation."

In other words, having a baby in the NICU can have a huge emotional and mental impact regardless of the severity of your child's medical concerns — and the study also found that, in general, mothers tended to have higher stress levels than fathers did. But one group that seemed to fair at least a little bit better? Older parents, who reported having lower stress levels than their younger counterparts.

This isn't the first time though that research has looked at the negative impact of NICU stays on parents' well-being. According to a Dec. 2015 article in the Journal of Perinatology, multiple studies have found that NICU parents often show "elevated levels of postpartum depression (PPD) and post-traumatic stress disorder (PTSD)," and that while not all parents experience mental health issues after discharge, it was previously estimated that around 20 to 30 percent of NICU parents experience a diagnosable mental disorder during the first postpartum year. That doesn't include those who might show "subclinical levels of symptoms" though — aka, they're struggling, but perhaps not to the point where they'd be considered to have a disorder — suggesting that the number could be much higher, as the Children's National Health System study suggests.

But beyond the obvious fact that the NICU can negatively affect parents' well-being, the studies have shown that symptoms of depression and anxiety can also have a negative impact on their babies' growth and development (a fact that, while important, shouldn't really be surprising given that it's hard to be the parent you want to be when you're also struggling with your mental health).

While many NICUs are making great strides to adopt "family-centered" care models that are meant to help ease some of the emotional burden on stressed-out parents, according to Science Direct, it sounds as though support isn't coming nearly fast enough. A 2016 article in Newborn and Infant Nursing Reviews found, for example, that many parents report "feeling left out of the caregiving process, excluded from decision-making, and dissatisfied about communication with their baby’s providers," which can certainly heighten their stress levels. And while more and more hospitals are implementing recommended mental health support strategies — things like parent-to-parent peer support programs, dedicated mental health staff, and follow-up support for families after discharge — it definitely isn't something all parents have access to.

As much as studies like the Children's National Health System study are important when it comes to educating NICU staff and influencing best care practices, the truth is that they're also incredibly valuable for raising general awareness about the reality NICU parents face, and validating that the experience really can be traumatic. When my twins were born at 25 weeks gestation in 2012, I wasn't surprised to find that having them in the NICU absolutely grueling — but I was surprised to realize that, in some ways, the struggle only got worse after we had left.

It took about a year after discharge before I started noticing symptoms of PTSD, and still, nearly five years later, returning to hospital for medical appointments and tests related to my children's prematurity still trigger intense flashbacks and anxiety. To the rest of the world though, leaving the hospital can look like a sign that everything is fine, and it can often feel like everyone assumes you're now just like any other parent who had a healthy delivery and had the chance to bring their child home right away (when that couldn't possibly be further from the truth).

There may never be an easy or straightforward way to make having a child in the NICU be anything other than completely heart-wrenching — after all, having a sick child is always going to be stressful and upsetting. But research is suggesting that, for many NICU parents, the impact goes far beyond just being upsetting, and that having a child in the NICU could put them at risk for mental health issues that might not just go away on their own.

Thanks to incredible medical advances, and the dedicated care of NICU staff, more and more parents than perhaps ever before are given the opportunity to bring home healthy, thriving babies that likely wouldn't have made it in years passed. As a NICU mom, that's something I'll be eternally grateful for. But it's still taken a big toll on my mental health, and the more the issue can be raised and discussed and the more people can become aware of the actual reality of NICU parenthood, the better off all NICU families will be.

More Like This
Ginger Zee Had A Perfect Response After A Troll Asked Her "Who's Raising Your Kids?"
The FDA Is Warning Parents To Not Use Baby Neck Floats After One Infant Died
6 Takeaways From The White House’s First-Ever Parents Press Conference
It's A Beautiful Day In Jenny Slate’s Neighborhood