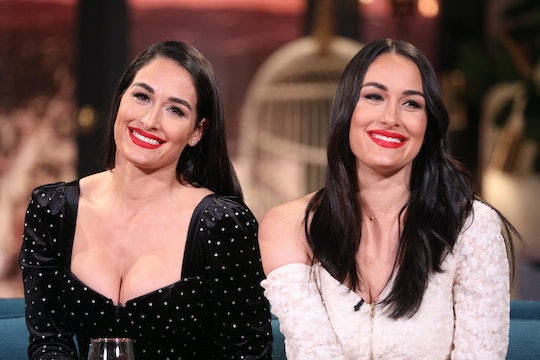 Although the twin sisters may be due 10 days apart, Nikki and Brie Bella didn't plan on getting pregnant at the same time. During a recent episode of The Bellas Podcast, the sisters revealed that they did not do in vitro fertilization, or IVF, so they could be pregnant together. In reality, they said it was a complete and total coincidence.

On the new episode of The Bellas Podcast, which was released on Tuesday, Feb 18, Nikki confirmed that neither she nor Brie did IVF to get pregnant. "IVF is no joke...it's just not an easy process," she said. "Even if Brie and I wanted to do IVF and plan it, you can't even plan that at the same time."

"Right, because you don't even know if your eggs are going to take," Brie added.

"It's so ridiculous," Nikki replied. "Brie and I did not do IVF, we did not plan on being pregnant together. I'm still in shock, even though I'm really happy."

Brie is expecting her second child with her husband, wrestler Daniel Bryan, and is due on Monday, July 27. Nikki is expecting her first child with her fiancé, Dancing with the Stars pro Artem Chigvintsev, and is due on Thursday, Aug. 6. So while they do have very close due dates and took their pregnancy tests two days apart, there was no planning involved. Sometimes, timing can really just be perfect.

"This is just what God wanted," Nikki added. "This is the way the universe worked. My sister and I happen to be a week and a half apart. God has a plan for it and I'm going on the ride with it, but there was just no planning here. We ain't the scheming twins. You got the wrong girls here. They weren't even planned pregnancies, let alone at the same time."

Nikki did tell Health in December that she was planning on freezing her eggs so she could become a mom sometime in the future. However, she said during a previous episode of the podcast that she got pregnant after having sex with her fiancé at Brie's house. Although the sisters never intentionally planned for this to happen, they are so excited about it. "But, Brie and I are very blessed that we get to be pregnant at the same time," Nikki said on the podcast.

The sisters promise that fans will get to see every step of this journey on the new season of their E! reality show Total Bellas, which premieres on Thursday, April 9.