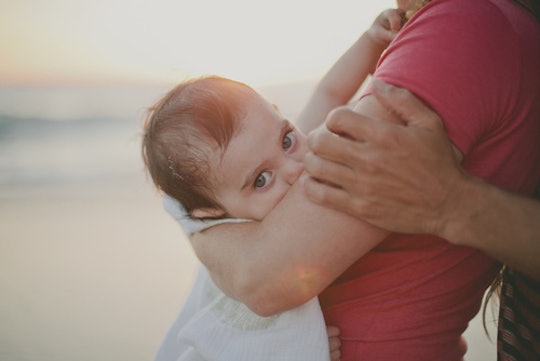 No, It's Not OK To Nurse While You're Having Sex

As someone who nurses an older child and practices extended breastfeeding, I feel like I am constantly on the defensive. I have to deal with people constantly accusing me of nursing for my own benefit, and not for my son’s. Worst of all, those allegations have a dark, sexualized edge: why would you let someone suck on an erogenous zone if you don't derive sexual pleasure from it? So anytime someone insinuates that breastfeeding between mother and child is a sexual act, I take that charge very personally, and it makes me very angry. How dare people take something so intimate and wonderful, and sully it by likening it to child molestation?

Some moms, however, aren't doing such a great job of combatting the idea that breastfeeding isn't inherently sexualized. Tasha Maile, who goes by Spiritual Tasha Mama on YouTube, recently made headlines for admitting that she breastfeeds during sex. In a recent video, Maile declared, “We love sex. God loves sex. We love peen! … If there is guilt and shame around that topic, there is some inner work that needs to be done… It’s not bad, it’s not good, it is what it is… Sex is sex, it’s a beautiful thing, and beauty is in the eye of the beholder.”

People were outraged almost immediately, with viewers calling the practice “creepy” and “incestuous." And while I don't think Maile had nefarious intentions, I happen to agree that it's deeply problematic. Breastfeeding moms constantly have to fight the idea that nursing isn't sexual — but if someone claims they do it during sex, it would reeeeeeeeeeaally look that way, especially to the general public. By blabbing to the whole internet about this intimate practice, Maile conflates breastfeeding and sex — and, in so doing, inadvertently damages the lactivist cause.

As sexual beings, Tasha claims, we are more powerful than we imagine. Powerful enough, apparently, to nurse a baby, bone our significant other, and separate the two even though we know breasts are an erogenous zone.

To be clear, I’ll defend a mother’s right to breastfeed in almost any circumstance. Nursing in public? Cool. Nursing a toddler in public? You go, girl. Nursing your almost 4-year-old in public? You do you. Nursing all night? Glad it’s working out. But when it comes to actually nursing during sex, the brakes screech.

Even though Maile is right that sex is a natural act, I can think of many, many situations in which sex is not healthy or appropriate — including having a child attached to one of your most erogenous zones while you get it on.

This isn't the first time Maile has admitted to doing this. In a 2015 video, Maile said, “I’ve had a lot of people ask me if it’s OK to have sex while you’re breastfeeding. I remember him [her son] sleeping on … me, breastfeeding, while [my partner and I] were to have like sex from behind or something. And there’s nothing bad about making love, ever. So just enjoy it.” Later, she added, “My 3-month-old was using me as a binkie at night, so we did it while we he sleeping next to me or on me. It had nothing to do with my child. My child was not in the act of what we were doing… he was not involved in it." Her argument is that sex is natural and so is breastfeeding, so it’s OK to have sex while you’re breastfeeding as long as baby’s asleep.

But even though Maile is right that sex is a natural act, I can think of many, many situations in which sex is not healthy or appropriate — including having a child attached to one of your most erogenous zones while you get it on.

Apparently, Maile is outraged that people are outraged by her video. She argues that because her kids were sleeping while she made love, nursing them during the act was totally OK. But honestly, this makes no difference. She's still sexualizing breastfeeding, and undoing all the hard work that dedicated lactivists have done to decouple sex and breastfeeding.

Facebook, for example, used to ban breastfeeding selfies, on the grounds that photos that showed a female nipple were inherently inappropriate. Thanks to protest from pro-breastfeeding groups, the social platform has revised its policy. And almost every week, we hear about another woman asked to "cover up" while nursing in public. This stems from a sexualization of breastfeeding and our culture's fear of seeing even a hint of nipple, and groups like La Leche League have worked hard to counter that view.

Currently, an online petition is circulating to put Tasha Maile on California’s sex offender registry. It claims she “engaged in a crime by involving her child in a sex act." As a breastfeeding mom who’s similarly been accused of sexualizing breastfeeding by nursing an older child, I do think what Maile did was wildly inappropriate, but I also think putting her on the sex offender registry doesn't do anyone any good. What she did sets back breastfeeding activism, and ties nursing to sex in unhealthy ways, but I don’t think she is an abuser or needs to have her kids taken away. Clearly, she was well-intentioned.

Still, I'm angry someone would breastfeed while doing the nasty, then take to the YouTubes to tell the world about it, making all of us nursing moms (especially AP moms, who are more likely to co-sleep) look like sexual deviants. Sex and breastfeeding don't go together. And neither do sex, breastfeeding, and blabbing about it.

More Like This
Why Does My Baby Cough While Breastfeeding? Experts Explain
40 Valentine's Day Outfits Your Girls Will Adore Showing Off This Season
13 Aquarius Baby Traits & How To Support Your Little Water Sign
Here’s Why You & Your Mom Can Fight So Much
What Parents Are Talking About — Delivered Straight To Your Inbox