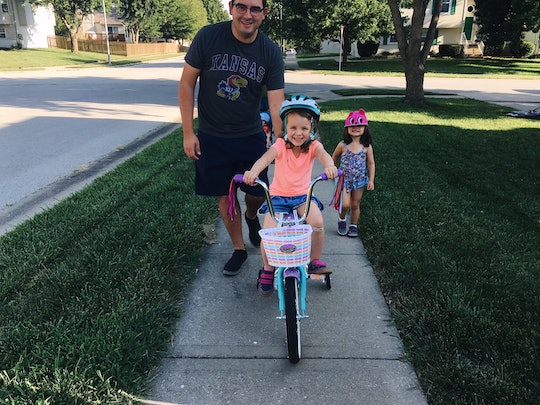 Dear people who say my preschooler has a boyfriend,

My daughter isn’t “crushing” on her classmate. She’s not trying to be "more than friends." She’s a social and affectionate preschooler and you're tainting a beautiful thing with your creepy comments. Worse, you're teaching her there is something wrong with boy-girl friendship.

My oldest daughter is something special. I have never seen someone who loves her people so much. As early as her first birthday, we saw this part of his personality emerging. The first source of her undying affection was my niece, who is seven years older than she is. We used to have to give her a pep talk half an hour before my niece left, just to help her process her sadness over saying goodbye. Since then, she has shown this same loyalty to multiple friends, both girls and boys, and I think it is so sweet.

Once she has made a friend, she is devoted. She will ask me about them regularly, check in on when we will see them again, and do just about anything to make them laugh. It was obvious early on that she didn’t reserve this loyalty for her friends who are female. Boy or girl, if my daughter loves you, she loves you “all the way,” as she so sweetly says.

Her innocence and her nondiscriminatory devotion is exactly why I find myself so damn annoyed with adults who tease her about having a boyfriend.

She’s five years old, for crying out loud; she isn’t thinking about romantic involvement, she's cry-laughing because Timmy made a fart joke.

It hasn’t been a one-time deal, it is an issue she has constantly been dealing with for over a year. There are two little boys that my daughter talks about all the time. They are really funny, and funny is one of my daughter’s favorite characteristics in a friend. As soon as they are in the same room, my daughter seeks them out, telling them a new joke she learned while they were apart.

The first time the icky "Ooh, she has a boyfriend" comment came up, it was “I think she has a crush on him." I quickly shut it down. She’s five years old, for crying out loud; she isn’t thinking about romantic involvement, she's cry-laughing because Timmy made a fart joke. Since then, it has been suggested she has a boyfriend, that they should have an arranged marriage, and that, you know, she should give him a hug.

I am constantly jumping in, and getting frustrated with other parents who get a kick out of embarrassing her over her friendships with boys.

I find it mean spirited. I find it inappropriate and, frankly, I want it to stop.

My daughter and other children her age deserve to make their own decisions about their friendships. Parents need to back off, stop trying to turn it into something it isn’t, and quit teasing kids about who they hang out with. You might think it is all in good fun, but children are human beings, not your playthings. They can be incredibly sensitive to the comments and suggestions adults make.

Maybe I am hypersensitive. As a high-schooler, a meaningful friendship went down in flames after constant teasing from the adults in our lives about how we “really felt about each other.” It still hurts to think about our friendship and how pressure to make it something it wasn’t brought up tension and conflict that ultimately tore us apart. This is not something I want my daughter to ever experience, and even at a young age I see it happening. I see her reacting nervously to the amount of attention she gets from parents when hanging with her male friends. I see her getting frustrated with suggestions that they share a hug for a picture and I feel like I am constantly stepping in, standing up for her by telling parents to back off.

The way other parents talk about her, she sounds like some lovesick teenager, dying for a glance from a crush, not a preschooler with a soft-spot for knock-knock jokes and hide-n-seek.

What’s worse, in my opinion, is that she is teased much worse than her little friends who are boys. The way other parents talk about her, she sounds like some lovesick teenager, dying for a glance from a crush, not a preschooler with a soft-spot for knock-knock jokes and hide-n-seek. Teenage girls and women face enough double standards as they get older, made to feel ashamed for how they interact with men or dealing with ridiculous rules like not being able to lunch alone with male colleagues, because of their so-called “womanly wiles.”

Soon enough, my daughter will start to think about her romantic future, but that should be on her own terms. I want her to feel confident and comfortable to bring it up when she starts to feel something more than friendliness towards another person and I think embarrassing her over platonic friendships only sets her up for a lifetime of feeling shame over being an affectionate and loyal person.

It is hard enough making and keeping friends, no matter your age. Let’s stop making it hard by projecting our stupid ideas about toddler romance on our kids.