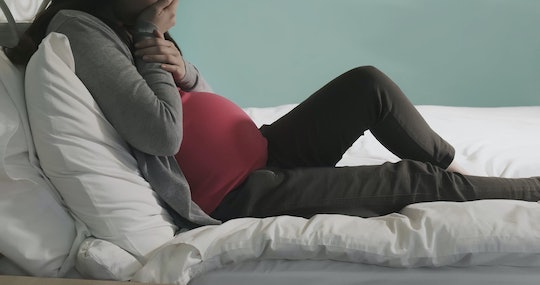 It was around the start of my second trimester when I started to feel intense waves of isolation and loneliness. Before I knew it, I was suffering from a debilitating depression that controlled how I felt about my loved ones, my pregnancy, and myself. But these dark episodes were viewed as nothing more than the byproduct of pregnancy hormones; the punchline of an overplayed joke. In other words, no one took my pregnancy depression seriously and it nearly cost me my life.

According to the American College of Obstetricians and Gynecologists (ACOG), a reported five to 25 percent of new mothers experience postpartum depression (PPD). The number of pregnant women who suffer from antepartum depression, on the other hand, is a reported 14 to 23 percent. The numbers vary so dramatically because pregnant and postpartum women aren't regularly screened for prenatal or postnatal depression. As Dr. Margaret Spinelli, M.D. and assistant professor of psychiatry and the director of the Women's Program for Psychiatric Services at Columbia University, tells Parenting, "Very often antepartum depression mimics the symptoms of pregnancy. A woman may not be sleeping because she's depressed or because the baby is kicking."

As a result, the red flags often go overlooked, the symptoms are often dismissed as run-of-the-mill hormone changes or pregnancy symptoms, and women are left to suffer in silence. Just like I did.

When I was diagnosed with pregnancy-induced hypertension and put on bed rest as a result, my depression manifested into something I knew I couldn't manage on my own. I tried telling loved ones how dire the situation had become, but I also hesitated and held back. I felt an immense amount of shame for not only being depressed, but depressed when I was pregnant and, according to everyone else, should have been the happiest I've ever been in my life. My fear of being judged, shut down, ignored, or labeled a bad parent often won out, and I kept my feelings and symptoms to myself.

I had no idea what post-pregnancy life had in store, but I had to hope it would be better than what I was enduring in the moment.

And when I did summon the courage to finally share those feelings with others, more often than not they were downplayed and discarded as nothing more than hormones doing what hormones do. My symptoms were instantly invalidated, my feelings of isolation grew, and suddenly I was in a downward spiral I couldn't control. Coupled with limited financial resources for medication, therapies, and additional doctors, I found myself gritting my teeth and trying to white-knuckle my way through the remainder of pregnancy. I had no idea what post-pregnancy life had in store, but I had to hope it would be better than what I was enduring in the moment.

When I gave birth to my beautiful baby girl I did feel a slight sense of relief. I figured that when the pregnancy ended, my depression would end, too. As you can imagine, though, I was wrong. I was trying to heal from labor an delivery, struggling with breastfeeding, and dealing with an extreme exhaustion the likes of which I had never experienced before. My baby felt like a stranger in my arms, even weeks after she entered this world, and my ability to bond with her was deteriorating.

No one took my pregnancy depression seriously, and as a result I have no doubt that I could've died.

It wasn't until a had my postpartum appointment with my doctor that I realized how much I truly needed. While I had seen other doctors prior to this memorable appointment, this doctor was the only one who could see the depression for what it was: not hormones, not postpartum symptoms, and not hysterics, but an illness that needed to be treated. She diagnosed me with severe postpartum depression, and helped me get the support I needed to be the safe, healthy mother, partner, and woman I was meant to be.

No one took my pregnancy depression seriously, and as a result I have no doubt that I could've died. Instead of becoming a mom, I would've become just another heartbreaking statistic. Until we acknowledge postnatal depression, we can't treat the affliction in a way that's beneficial for those who are suffering. Until we rid mental illness of the stigma and shame that has left so many of us in the dark, we cannot support people in the way they need.

If I had it to do all over again, I would scream from the rooftops that I'm depressed in way that frightens me and that I need help. Maybe then I'd have been taken seriously. Maybe I would have received the help I needed sooner.