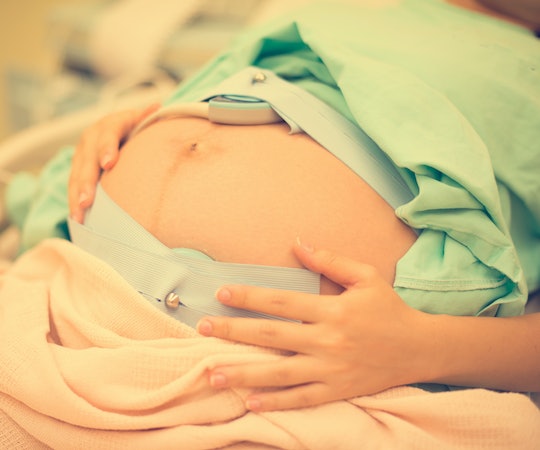 Everyone Jokes About Pregnancy Pains & That's How I Almost Died

When I found out I was pregnant I knew I was going to experience a slew of symptoms. I prepared myself for morning sickness, food aversions, heartburn, and swelling. Hell, everyone jokes about pregnancy pains too, so I considered them mild at best, and annoying and inconvenient at the very, very worst. But the nonchalant way in which we, as a culture, talk and joke about pregnancy pains put me and my baby at risk. In fact, it almost killed us both.

Both of my pregnancies were labeled high-risk, so when I was pregnant I always felt like everyone was judging me. What did the pregnant woman do to put her health in jeopardy? Why is she eating this, or drinking that, if she's high-risk? Specifically, I had gestational hypertension which, according to the American Pregnancy Association (APA), is high blood pressure during pregnancy. Untreated, it can result in preeclampsia. A reported six to eight percent of pregnant women are diagnosed with hypertension, and first-time moms are actually at an increased risk of developing gestational hypertension. With my daughter, I was induced and, thankfully, gave birth to a healthy baby. The pregnancy, labor, and delivery with my son, however, went differently.

I endured two painful miscarriages before I found out I was pregnant with my son, so I already felt betrayed by my own body going into the pregnancy. And, once again, I was labeled high-risk due to the two previous pregnancy losses and another bout of gestational hypertension. I was ordered on bed rest, with the hopes that I could avoid induction or a pre-term labor, and for some odd reason it felt like I was constantly peeing myself. Like, all the time. And, well, that's when the jokes started.

When we, as a society, create a culture that dismisses a pregnant woman's symptoms or health as "just part of the deal," we perpetuate a culture of silence.

It's easy to poke fun at a miserable pregnant woman who is obviously experiencing all of those stereotypical symptoms. It's low-hanging fruit, after all, to talk about how swollen she is, how "huge" she is, how she can't see her feet and how she better "get all the sleep she can now, because once that baby comes..." And I guess, if you've never been on bed rest before, it probably seems harmless to joke about how "lucky" that pregnant mom is. I mean, she gets to lay in bed, watch Netflix, and skirt those adult responsibilities, right? And if you've never experienced the "joy" that is losing bladder control while pregnant, I guess you could find it hilarious. Pee is funny, right?

Wrong. Being embarrassed and afraid to sneeze or laugh isn't funny. And bed rest isn't some magnificent vacation. It's terrifying. It's uncomfortable. It's lonely. When we, as a society, create a culture that dismisses a pregnant woman's symptoms or health as "just part of the deal," we perpetuate a culture of silence. And that's exactly what I did: I remained silent. I "sucked it up." I ignored aches and pains until, well, I couldn't.

And then I started leaking amniotic fluid.

The "pee" everyone loved to joke about was, in fact, amniotic fluid. When my doctors discovered that I was leaking the vital liquid that surrounded my baby, I was induced immediately. My son was in distress, I was in distress, and time was running out. The medical team hooked up a fetal monitor and told me to stay laying down, on my left side, until it was time to deliver. I could feel my son's every move and, at one point, my doctor had to re-position him. Manually. My excrutiating, uncomfortable labor lasted three days.

I wailed one final scream, then lost consciousness. If anyone else was still joking, I didn't hear them.

When I was ready to push, something felt off. What felt like a wire, tightening every second, was stuck inside of me and preparing to snap. Every necessary push was agonizing. I screamed. I cried. I begged for it all to stop. I screamed some more. My mother-in-law was in the room, and joked that I had to keep my voice down or I would run the risk of scaring the other laboring women in the hospital. As you can imagine, I didn't laugh.

Instead, I focused all my energy and strength into that final push, and as soon as my son entered the world something did snap: the umbilical cord. The cord was wrapped around my son's neck, and my final push had severed it entirely. I wailed one final scream, then lost consciousness. If anyone else was still joking, I didn't hear them. I vaguely remember an oxygen mask being placed over my mouth and nose, and a rush of doctors and nurses gathering around both me and my son. I can't remember how much time had passed before I regained full consciousness, or how long it took for my son to take his first breath.

If had not been induced when I was, my son's umbilical cord could have snapped in utero. He could have died, I could have bled out and died, and I could have left my husband and daughter without a wife and mother. I bled out in the hospital, too, but luckily I was in an environment, surrounded by doctors, equipped to handle an emergency. I shudder to think what would've been if I was anywhere else.

So, no, pregnancy pains aren't a joke. Sometimes pesky cramps are miscarriages, and "funny" swelling is a blood clot, and embarrassing pee is vital amniotic fluid. If we truly value mothers the way we claim we do in this country, we must stop trivializing their experiences to the point we dismiss them or find them funny. Yes, we should all feel free to find the humor in the often ridiculous symptoms and situations of pregnancy, but we also have to believe women. We have to trust women. And when women speak up and tell you something is wrong or feels "off" or isn't funny, we all have to listen.

More Like This
In Search Of New York City's Most Luxurious Birth Experience
30 Marvelous Baby Boy Names That Start With “M”
The Morning Rush Is Parenting At Its Most Essential
Sex And Mom Guilt: When I Date Someone New, Am I Cheating On My Kids?