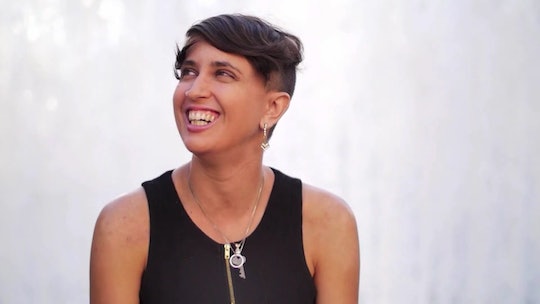 Recently, people have become a lot more open about postpartum sex, and I think that is awesome. I really do. I love that there is a national conversation about sexing after baby-having. I just think that that conversation should include more discussion about queefing. So let me be the first to put this out there: after you have a baby, postpartum queefing is a thing. While it's not the end of the world, it's worth having a conversation about, IMHO.

I loved postpartum sex. Thanks to the cultural belief that your vagina is irreversibly stretched out after you have a baby, I was worried that I'd be cavernous down there, but according to my partner at the time, that wasn't the case. He said, "I've been with women who haven't had a baby, and I've been with you, and you really don't feel like you've had a baby." I was elated: Hooray! My vagina wasn't a vast, capacious, echoing cave of darkness!

But what my vagina lacked in spaciousness, it made up for in percussion. I mean, look: Weird sounds happen during sex. It's just a given. Our bodies are beautiful, but they're also a little noisy and squishy sometimes. As a person who is comfortable with my body, I was prepared for this. But I simply wasn't prepared for the amount of queefing that happened that first night (and on subsequent nights, as well!). I simply hadn't been warned.

To be fair, I probably should've suspected that queefing during postpartum sex was a strong possibility. Queefing is the result of displacement of organs in your pelvis, which causes air to enter the pelvis and travel out the vagina. Since pretty much everything gets displaced during labor, queefing was probably something of an inevitability.

The first time it happened, my partner and I managed to keep a straight face. Because most doctors recommend that you wait at least four to six weeks before you have sex postpartum, we'd been eagerly awaiting this moment for many, many weeks, and a few vaginal sound effects couldn't dampen our enthusiasm for getting down. I'd done some Kegels beforehand, but maybe I should have done more. As it continued, we persisted in pretending it wasn’t happening. Who cared? We were getting busy.

But the queefing didn't go away after that night. It happened again, in a place that was supposed to be my safe space: yoga.

Sex-queefing had nothing on yoga-queefing. When I queefed during sex, it would just be a few bass notes sprinkled into our sex soundtrack. When I queefed during yoga, it was a full-on symphony. It was conspicuous AF. It was repetitive, prolonged, and loud. And of course, the room would always be packed when this was happening.

Since the room was so crowded, I would pray that people wouldn’t quite know which body (or which part of the body) the sound was coming from. I would try to cover the sounds up with big mouth sounds, like I was just having that intense of a yoga practice. I would do big vocal hum-sighs on the exhale, or blow air through my lips like a kid making motorboat sounds. I doubt I fooled anybody. You could still hear that tell-tale sound: ppfffwwwrrrbbbttt.

Eventually, through the magic of time and continued Kegel-ing, the sex-queefs mostly went away. Key word: mostly. I still surprise myself and my current partner from time to time.

But it’s been five years, and the yoga queefs continue to this day. You know what triggers them? It’s not the big, leg-spreading poses where my downstage-center gets exposed. No, the pose that brings my queefs to the yard is…handstands. Handstands. WTF? Why? Why do I queef during handstands? I don’t know, but it happens every time. Maybe there’s something about the inversion of gravity that causes the air to flow downward? I don’t know. I give up. Or maybe I don’t want to know. Maybe I just want to let my magical yoga-queefs be a beautiful mystery.

As with postpartum pooping, postpartum queefing is something I wish we talked about more often, or at all. If we shared our wisdom and experience more often about the mysterious new, er, movements of our postpartum bodies, maybe they wouldn’t feel so strange or disorienting to inhabit. We would know: This is normal, this is fine, this will pass, and I am not alone.

More Like This
How A Recall Of Contaminated Formula Made The Formula Shortage Crisis So Much Worse
Can You Help Your Baby’s Hair Grow?
Breaking Down The Different Types Of Postpartum Infections
Here’s What You Need To Know About That Viral 1960s Baby Formula “Recipe”