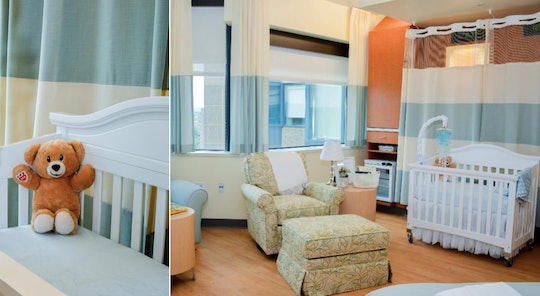 Having a child is supposed to be the happiest moment of your life, but for parents of babies born early or with complications, it can quickly turn scary. Those children are whisked away to the Neonatal Intensive Care Unit (NICU) for further treatment or observation, leaving new parents feeling worried and somewhat in the dark about the future. I know because it happened to me. My son spent 10 days in a NICU more than 40 miles from me while I recovered from an emergency C-section. Our story has a happy ending, but for many parents, the NICU is sometimes the first, and only, place they'll ever get to bond with their child. That's why this nonprofit has created cozy NICU rooms for parents to help them make "beautiful" memories with their babies during such a difficult time — with all the comforts of home.

Alicia's Angels Inc. is a volunteer-run organization that aims to create comfortable hospital rooms for parents of NICU babies that will never get to go home with their families, as TODAY Parents recently reported. The nonprofit was started by Jona Sager, who tells Romper in a phone interview she was inspired after her own loss roughly 40 years ago. Sager was in a car accident and sadly lost her daughter, Alicia Marie. Her only memories of her daughter's life take place "in a very ugly hospital room," she says.

Sager has always been committed to helping NICU families; she tells Romper she worked as a NICU nurse for 30 years, and says that while nurses and other hospital staff "work very hard to make it as good of an experience as you can for something so awful," there's always room for improvement. So she pitched her friends and family on Alicia's Angels Inc. and got to work providing even more comfort to families that won't get to experience the joy of bringing their babies home.

Sager tells Romper the idea came to her after speaking with families she had cared for along the way. "There are a lot of children who for various reasons never get to go home with their family. They lose their children before they’re ever able to go home," she explains. "And a lot of the families that I took care of along the way expressed to me how hard it was for them not to be able to hold their baby in a beautiful nursery, to be able to rock and sing to them in a peaceful environment. You know, they were in the cold sterile hospital rooms."

Sager continues, "Some of them are quite beautiful — especially [Yale New Haven Hospital]. But it’s not home. So over the years taking care of these families, when medicine couldn’t do any more, I wanted to be able to do something more."

Sager approached close friends and her "absolutely incredible husband" about her dream of creating this organization, and Alicia's Angels Inc. was born. From there, she says they went to Yale New Haven Hospital in Connecticut, and the hospital agreed to allow them to set up their first room in the NICU, called The Alicia's Angels Family Inc., Care Room.

The room is still very much a hospital room, but has added touches that bring warmth and comfort. Sager tells Romper Alicia's Angels Inc. wanted to be able to "camouflage or hide medical equipment" and bring in "home-style furnishings" so families who can't go home with their children could at least create some lasting memories in as similar an environment possible.

Sager says none of this would have been possible without the support of Yale New Haven Hospital, through whom she and the rest of the Alicia's Angels Inc. board have learned a lot. She tells Romper the hospital welcomed them "with open arms and they've been incredibly supportive."

With all that she and everyone involved have learned from the hospital, Alicia's Angels Inc. has been able to set their sights on the future. And Sager hopes to see rooms like the one at Yale New Haven Hospital established in NICUs across the country.

"We would very much love to be able to create these rooms in a multitude of NICUs across the country," she says. "I've gotten messages and comments from people all the way across the country, and most recently a comment from Australia, that people wish it had been there for their children, people that wish it would be in their NICUs. That gives me a lot of reassurance that all of the work and dedication by everyone I asked to join me — that it meant a lot to a lot of people."

"It's incredibly rewarding. It's always hard as a nurse to not be able to do anything else," Sager went on to say. "... they have these children for such a short time and the memories that they make in that time have to last them forever. So to help make those memories more beautiful and peaceful, and gentle is incredibly rewarding."

More and more hospitals have started offering private rooms in NICUs, allowing parents to be alone with their children during their stay, but few offer the comforts of home for infants with extended stays in the NICU, or those who won't be able to leave. For instance, the Children's Hospital of Orange County introduced private NICU rooms in 2017, according to its website. This is major, of course, but there's still more that could be done to bring comfort to both parents and children.

Many NICUs do different things to make parents and babies' stays more comfortable already, like dressing babies up for the holidays, which Katelyn Zilles — a Certified Child Life Specialist at Lurie Children's Hospital — previously told Romper can provide "a sense of normalcy and joy," but there's always room for more heartfelt initiatives and ideas to help parents and families during a difficult time.

Alicia's Angels Inc. is run entirely on donations, so their dreams of expansion rely entirely on support from the public. While I was able to bring my own son home from the NICU, having a comforting, homey environment to bond with him during that frightening period would have meant everything to me. This service will undoubtedly be life-changing for parents of NICU babies.

More Like This
Here’s What You Need To Know About That Viral 1960s Baby Formula “Recipe”
Abbot's Formula-Producing Plant Can Reopen In As Early As 2 Weeks — Now What?
Can You Help Your Baby’s Hair Grow?
Gerber's New Spokesbaby Isa Has The Biggest Brown Eyes & Was Born With A Limb Difference