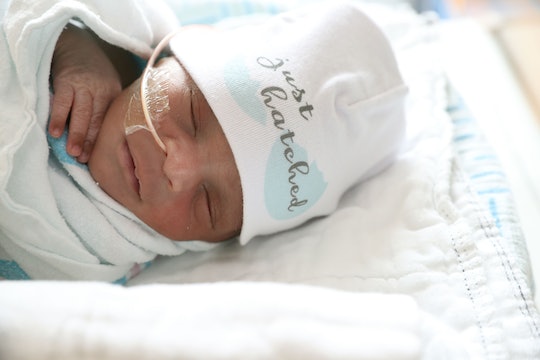 Having a child in the hospital is never easy, especially around the holidays, but there are some ways to make it a little more bearable. Swapping traditional hospital garb for cute little outfits is definitely one of them. And this hospital's "just hatched" hats for babies in the NICU are truly too cute for words, and the comfort they undoubtedly bring to families spending Easter or Passover in the hospital with their little ones is immeasurable.

Staff members at Ann & Robert H. Lurie Children's Hospital in Chicago dressed some of the babies in the Level III NICU, where the smallest and sickest patients are treated, up in adorable spring outfits — including the cutest hats that perfectly say "just hatched" across the front. In addition to the adorable hats, some of the children were dressed head-to-toe in spring-themed outfits and bunny costumes.

Because newborns and infants who are in the NICU may stay for long periods of time and may miss several holidays at home with their families, getting festive like this helps parents of NICU babies have "a sense of normalcy and joy," as Katelyn Zilles, a Certified Child Life Specialist in the unit, told Romper in a statement. "Springtime is a season of blossom and growth, and Lurie Children's wants to make memories with the tiniest patients as they 'bloom,'" Zilles said.

Lurie Children's Hospital in Chicago has 64 NICU beds, according to the release. Some of the tiny patients there have been in the hospital since October and are gearing up to spend a second holiday there surrounded by staff and loved ones.

Child life specialists at the hospital "are committed to empowering families and giving them a sense of 'normalcy,'" despite their abnormal circumstances, which is where the cute hats and costumes come in. Zilles said in the statement that it's imperative that parents of NICU babies have opportunities to "build on every day moments" with their kids, including "dressing them up for holidays."

With Easter coming up on Sunday, April 21, parents will have the opportunity to dress up their little bundles of joy in hats and outfits that celebrate the season — and provide the perfect photo opportunity, too.

"It is very important for parents to build on everyday moments such as smiling, touching them, talking to them and dressing them up for holidays," Zilles said in the statement. "The Easter season is a perfect time to encourage healthy bonding."

Costumes in NICU's aren't uncommon. In October, many facilities make it a point to dress up NICU babies in adorable outfits, so they and their families can enjoy the holidays just like everyone else.

On Halloween, for instance, another facility often makes headlines for its creative NICU costumes. Last year, babies at Loyola Medicine's NICU were dressed as tiny Disney characters, Beanie Babies, superheroes, and more, according to Babble. This has been a tradition at the hospital for 30 years, according to the hospital, and nurses there enter the precious patients into costume contests with their parents' permission, which would surely bring joy to any hospital unit. C'mon, look at this adorable astronaut from Halloween 2018!

Other organizations are taking a similar approach to providing normalcy in less-than-normal situations for sick kids and their families. In December 2018, according to Click Orlando, a non-profit called Capes and Crowns traveled across the country taking photos of children in hospitals and transformed the images into works of art.

Kylie Cole, the photographer behind the project, told Click Orlando, "We take the pictures in hospitals, hotel ballrooms, and create these images out of nothing." The photos are transformed into whimsical scenes of kids dressed as princesses, action heroes, and whatever else they can dream up. "For families to be able to cherish that and have that for years and years to look back on," Cole told the news outlet. "We want to be able to give them this piece of joy and happiness and just a day for them to just be a kid."

When your child is sick or in the hospital, every little ounce of joy counts. As parents who have spent any length of time in the NICU or hospital with their kids know, anything that brings a smile to your face during that difficult time is welcome.

And who doesn't love a baby in a costume?

More Like This
30 Adorable Baby Halloween Costumes, From Animals To Avocados
Are You Leaking Amniotic Fluid Or Is It Normal Discharge? Experts Explain
Here's How To Keep Your C-Section Incision Dry
Experts Explain Whether It’s Safe For Your Baby To Sleep On Your Chest