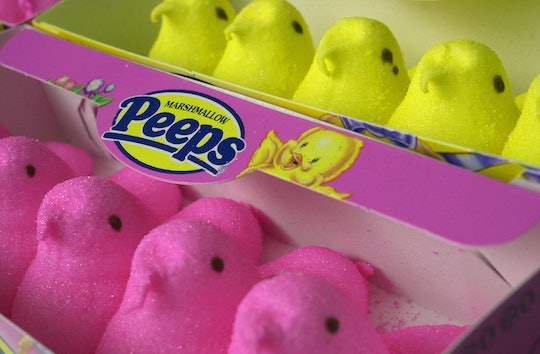 Don't Let All The Peeps Everywhere Fool You; Easter Is Still Pretty Far Away

Go into a CVS or supermarket today, and you'll see that the shelves that once held Valentine's candy are now piled high with chocolate eggs and stuffed bunny toys. That means Easter is just a few weeks away, right? Um, wrong. Easter 2019 will actually come later than it has in the last five years. That doesn't mean you can't go ahead and buy a box of Peeps or a Cadbury egg; it just means that you'll have to wait longer to eat it than you might have anticipated. (Assuming you actually wait until Easter to eat Easter candy. Does anybody do that?)

This year, Easter Sunday falls on April 21, confirmed the Old Farmer's Almanac. That's quite a jump from last year's April 1 celebration (did anybody play any Easter April Fool's jokes on you?), not to mention 2016, when Easter fell on March 27.

Blame it on the calendar. While most other traditional religious and secular holidays are set on a fixed date on the Gregorian calendar (think Christmas, Independence Day, and St. Patrick's Day), the date of Easter was established back in 325 AD by the Council of Nicaea, according to Calendarpedia. The bishops decreed that Easter would always occur on the first Sunday after the first full moon on or following the vernal equinox.

Complicated enough for you? Wait, it gets better: Since the spring equinox can occur anytime between March 19 and 21, the Church ruled that Easter's annual date should be determined based on a March 21 equinox, even if the equinox actually fell a day or two earlier.

That explains the lateness of Easter this year, the Farmer's Almanac went on to say. The 2019 vernal equinox falls on Wednesday, March 20 — and, coincidentally, so does the March full moon. If not for the Church rule about calculating Easter, you'd actually be celebrating the holiday on March 24. But since the moon won't go full again until April 19, everything now gets pushed back to the 21st. (Got it?)

And that's not even mentioning Orthodox Christianity, which follows the older Julian calendar to determine its feast days, explained Office Holidays. In Greece, Serbia, and other countries with large Orthodox populations, they'll be having their feasts and displaying their eggs a week later, on April 28.

The Easter season officially begins with the solemn holy day of Ash Wednesday, which is always 46 days before Easter, according to Christianity.com. This year, it falls on March 6, and Christians worldwide will spend the following weeks in reflection, sacrifice, and fasting to recall Christ's time of temptation in the wilderness.

It's also worth noting that the timing of Easter usually coincides with Passover, the Jewish holiday celebrating the exodus of the Hebrew slaves from Egypt, noted My Jewish Learning. Both holidays were established as spring celebrations by ancient religious authorities, and the structure of the Jewish lunar calendar (which slips in an extra month every couple of years) helps bring the two holy periods close together. Indeed, Holy Thursday, which falls three days before Easter, commemorates the Passover Seder meal that Jesus and his disciples shared before his betrayal and crucifixion.

(If you think it's odd to celebrate Easter in March one year and April the next, try keeping track of all the shifts in the Jewish holidays. Just a couple of years ago, Hanukkah began the day after Thanksgiving. Turkey and latkes, anyone? And for folks like me who are Jewish with Christian spouses, it's tough having to say no to Easter cakes during Passover, when we give up anything made with yeast or other leavening ingredients.)

Next year, Easter will come a couple of weeks earlier, on April 12, and even earlier in 2021 (April 4), Calendarpedia affirms. So you'll definitely want to buy your chocolate and Peeps right after Valentine's Day and keep them in storage to avoid the rush.