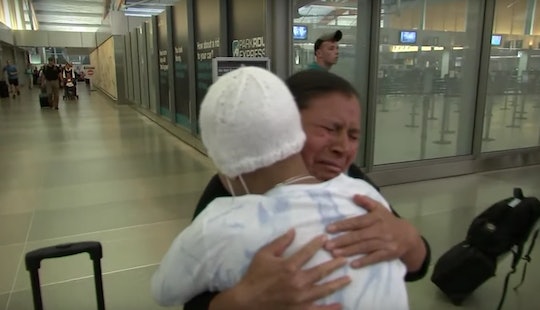 Imagine for a moment what it would be like to be just 14 years old and trying to battle leukemia. Imagine how frightened you would be, how much you would need to be around the people who love you most in the world. Now imagine you had to travel far from home for treatment with your mom, and then suddenly she's gone. It is an impossible thought to bear, and yet that is exactly what happened to Ixcell Sandoval Perez. She and her mother were separated at the border, until some thoughtful advocates helped reunite the mother and her young daughter who's battling leukemia and the heartwarming and powerful moment was caught on video.

Ixcell Sandoval Perez was diagnosed with leukemia when she was living in her hometown of Chiapas, Mexico with her mother Dalia, as ABC News reported. While it was clearly a devastating discovery for the 14-year-old and her mother, the two bravely moved forward towards treatment. They boarded a bus headed for Raleigh, North Carolina, where Ixcell was set to receive medical treatment.

Unfortunately, the unthinkable happened. As their bus arrived at the U.S.-Mexico border in Tijuana, Dalia was denied entry into the country. Dalia described the terrible moment in a video filmed by Solidarity-Now, a human rights advocacy group dedicated to helping people at the U.S./Mexico border.

"They took everything away from us. They took us into a room. In the afternoon, they left us in a cold room but it was so cold and my daughter was feeling so sick," Dalia explains in the video. "I pounded on the door and shouted for them to open it, but no. My child was so thirsty but no one would listen to me."

Ixcell was born in Raleigh, according to People, and the family had been living in the United States until 2010 when Dalia's visa expired. Despite the fact that Dalia did apply for another admission at the San Ysidro port of entry, she was ultimately denied entry, ABC News reported.

Dalia had to watch as her daughter carried on with a family member living in the U.S. to undergo cancer treatment at Duke University on her own. Dalia was understandably left in distress, wondering when she would see her daughter again. Fortunately, help was on the way.

After Ixcell and Dalia's tragic story was shared in the media, the nonprofit organization Miles4Migrants got involved. This organization uses donated frequent flier miles to help bring immigrant families to the United States, and a donor from San Francisco offered their miles to Dalia after she was granted a temporary humanitarian waiver, according to WRAL.

"Our partners at Lawyer Moms of America came to us with Ixcell and Dalia's story," Miles4Migrants co-founder Andy Freedman tells Romper. "While this case was a bit outside our normal family reunification, the heart-breaking reality of a mom being separated from her daughter fighting such a terrible disease compelled us to jump in and work to help fly Dalia to be by her daughter's side."

And on Wednesday, Aug. 28, the mother and daughter were finally reunited. A video shared on Twitter by ABC News reporter Josh Chapin shows Dalia brought to tears as she hugs her daughter.

While it is obviously wonderful news to see this mother and daughter reunited, it remains unclear what the future holds for Dalia and her daughter. President Donald Trump remains resolute about tightening up migration at the southern border and Dalia's visa is a temporary one.

But for now, at least she can be at the hospital with her daughter. To comfort her, to care for her, to hold her hand... and hopefully to see her recover.