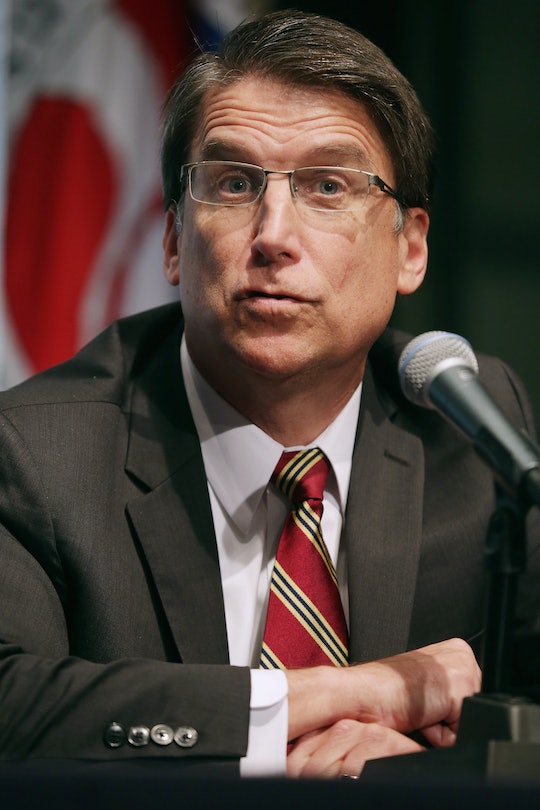 There's a saying about what's happening in North Carolina right now: "A day late and a dollar short." On Tuesday, North Carolina Gov. Pat McCrory amended the "bathroom bill" — a controversial piece of legislation that was passed just recently — following widespread protest from activists and several big name companies, but it simply wasn't enough to stem the rising tension. Among other things, the original bill, House Bill 2 (HB2) mandated that transgender individuals use public restrooms that aligned with the gender on their birth certificate. The bill also takes away the rights of workers to sue under anti-discrimination laws if they have been fired based on their race, sexual orientation, or religion.

The governor has now done some serious backpedaling in terms of removing the parts of the law that allowed employers to fire LGBT individuals, but he has remained suspiciously recalcitrant in others. On Tuesday afternoon, McCrory signed Executive Order 93, which implemented the following:

Essentially, the governor is happy to protect the rights of the working LGBT community, so long as they're peeing in the restroom of their birth.

The LGBT community has not been the only voice of protest against this controversial bathroom bill. North Carolina Attorney General Roy Cooper was quick to criticize McCrory's halfhearted attempt to save face in the court of public opinion. According to The Washington Post, Cooper released a statement in response to Executive Order 93, which read,

The sweeping discrimination law he signed has already cost North Carolina hundreds of jobs and millions of dollars in revenue. I’m glad Governor McCrory has finally acknowledged the great damage his legislation has done, but he needs to do much more.

Since the discriminatory HB2 was first passed, a number of high-profile names have come forward to speak out against the move, including Bruce Springsteen. Springsteen reportedly cancelled an upcoming concert in North Carolina in a show of solidarity with the LGBT community, explaining in a statement on his official website,

Some things are more important than a rock show and this fight against prejudice and bigotry — which is happening as I write — is one of them. It is the strongest means I have for raising my voice in opposition to those who continue to push us backwards instead of forwards.

HB2 also had a profound effect on the state of North Carolina's jobs sector. When the bill was finally passed in late March, PayPal backed out of building a new facility, and the NBA implied that it had considered moving the 2017 All Star game in Charlotte to a new venue. In addition, 80 major executives from companies such as Facebook, Bank of America, and Apple banded together on Twitter to protest the passage of the bill, even publishing a letter on the Human Rights Campaign website that read in part, "Such laws are bad for our employees and bad for business."

Revenue and jobs now potentially lost, pressure on Gov. McCrory will likely continue to build. Executive Order 93 is certainly a step back in the right direction, but it just isn't enough. Progress is happening whether the governor likes it or not.