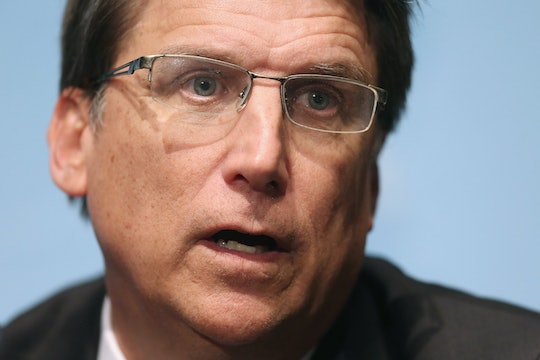 North Carolina lawmakers hit the state's residents with a figurative bomb on Wednesday, setting back all LGBT progress made within the state. The North Carolina General Assembly discussed and passed a bill all within the same day to repeal all local LGBT nondiscrimination ordinances — something that came as a total out-of-the-blue surprise to most people who did not see the bill coming. Because of this, residents of the state as well as businesses within the state are very upset and speaking up and out about the ban. Through Twitter, residents of North Carolina respond to the non-discrimination ban with #WeAreNotThis showing that just because they live in the state, does not mean that it reflects them.

The ban, which is formally known as the Public Facilities Privacy and Security Act, bans people from using bathrooms that don't formally align with their own biological sex. It also bars any local municipalities in the state to pass their own anti-discrimination ordinances, so basically every single town has to abide by this new law.

While it is doubtful than there will be policemen and government officials standing outside of bathrooms giving tickets to those who enter the one they feel most comfortable in picking, it sends a clear message to the LGBT community and residents in the state. It tells them that the state does not want them to feel safe or comfortable with who they are and forces them to be someone that they are not putting themselves at harm.

In retaliation, both residents have come together on Twitter to speak out in opposition of the new ban, using the #WeAreNotThis in various ways of protest.

Twitter user Sarah Hogg makes a very strong point. From both LGBT individuals to allies alike, the bill does more harm to everyone in the state than it does good, even the ones the bill was wrote in part to "protect."

#WeAreNotThis has been trending on and off since the bill was passed on Wednesday and for a good reason. The ban could potentially set a precedent for any conservative state looking to do exactly what North Carolina did. By trending on Twitter, #WeAreNotThis brings national attention to the issue at hand, letting people know that discrimination is very real and still alive in some states.

Businesses and major corporations have also come out in protest of the non-discrimination ban.

Major companies, like Oracle and Red Hat have spoken out against the ban and how they will never agree with the new policy. Heck, even Twitter and Fortune 500 company Dow have come out again the new law. And that is just the beginning.

In addition, WRAL reports that American Airlines, based out of Charlotte, North Carolina has publicly spoken out against the ban. And businesses such as Wells Fargo, Apple and Microsoft have signed on to a statement in opposition of anti-discrimination laws.

#WeAreNotThis proves to law makers, the North Carolina General Assembly, and people of the United States of America that North Carolinians and the businesses in the state are not going to tolerate such hatred within their homes. The trending of the hashtag proves that people are not going down without a fight and the fight is not over yet.