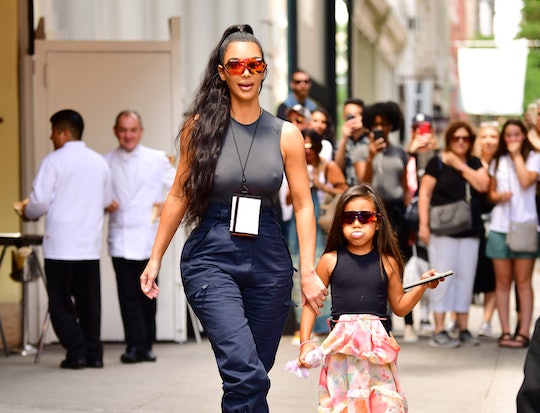 North West's Skincare Routine Might Be Better Than Yours, TBH

Kanye West recently put his foot down about an element of his 6-year-old daughter North's beauty routine; apparently he's not really into her wearing makeup. This might seem fairly normal, but don't forget that her mother is a literal makeup mogul who has admitted to using cosmetics as a bribery tool in the past. North West has been a regular makeup artist on her mom's social media feed over the past few years, so what's a girl to do now? Well, don't anyone worry, because North West's new skin care routine is apparently her favorite thing in the world — maybe even more than makeup used to be.

Back in September, Kim Kardashian-West admitted that her husband had recently "put his foot down" about North wearing cosmetics. She told E! at the time, "North is trying to get in on the makeup, but she's being blocked heavily because her dad has stopped all makeup for her until she is a teenager. It's a big discussion, a big fight in the household right now, but it is what's best. I think as a parent you just learn and figure it out as you go and we realized we didn't really want her to wear makeup at a young age, but she sees her mom putting on lipstick and lipgloss."

While North might not have been super crazy about the new rules, she has managed to distract herself with a new kind of self-care: sheet masks.

In a recent interview with Allure magazine, Kardashian-West, now a mother of four, opened up about North's new preferred skin care routine, and honestly it sounds like a really great Thursday night to me.

She’s found it really fun to do a face mask. I’ll get her sheet masks, and if she’s having a sleepover, I’ll do a mask with the girls. They think it’s so funny for some reason. I don’t know why. They just think they’re so fascinating.

I'm sorry, but is there anything better in this world than a group of little girls getting together for a sleepover and indulging in a spa moment with sheet masks on their faces? Since this is Kim Kardashian-West's daughter we are talking about I'm certain there are people out there who will criticize North's new hobby, but this isn't exactly uncommon. The Koala Mom website shared five easy homemade recipes for kids' sheet masks and noted that good skin care can really start at any age.

As for North's love of cosmetics... Kanye West might not be out of the woods yet. When the little girl dressed up with the rest of her family as the Flintstones, she fully embodied Wilma Flintstone with a copper wig, white one-shoulder dress, and a raspberry shade of lipstick.

Kim Kardashian-West was right when she said parenting is about figuring it out as you go. You give a little here and take a little there.

No makeup until the teen years? Fine. But relaxing skin care routines as a bonding moment with your friends and your mom? 100% yes.