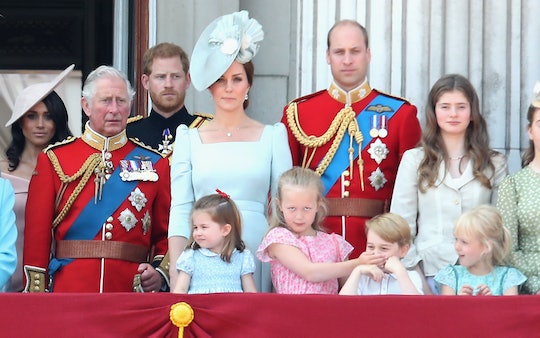 We Treat Big Families With Money Differently Than Those Without

“We have an announcement to make,” Kim Kardashian said in the trailer for the 16th season of Keeping Up With The Kardashians, which will see Kardashian and her husband Kanye West prepare to welcome their next child via surrogate — another grandchild to be added to Kris Jenner’s nine. Jenner’s large family will continue to be a ratings boom, but how are big families viewed across the rest of the country?

The size of the average American family is declining, and society’s opinion of “big families” continues to evolve. There is an overall trend to idealize large families, according to Gallup, despite most families not choosing to actually have larger families anymore. The decline in U.S. fertility also contributes to the growing rarity of families with three or more kids. So when we do see a large family, it catches our attention. How exactly we perceive them, though, might have a lot to do with their socioeconomic status.

Shining American dynasties like Rose Kennedy’s brood of nine children have long defined the ideals of our nation. Each child appeared to be more accomplished than the next — except for their wild child Kathleen “Kick” Kennedy who died alongside her married lover in a plane crash at the age of 28, shaming her mother so much that she didn’t even attend her funeral. For the most part, though, families like the Kennedys are seen as American royalty and their ability to proliferate fulfills their patriotic duty. Similarly, the Bush political dynasty has drawn accolades. Barbara and George H.W. Bush had six children, five surviving into adulthood. While political pundits may have their criticisms of the political careers of the Bush men, a disparaging word is rarely heard about the large brood of children and grandchildren produced by the family. Wealth and perceived success insulate them from such judgement.

In the reality TV era, a new generation of “royalty” has taken over the throne, and celebrity families like Kris Jenner and her six kids earn our praise and Instagram hearts. They’re famous for, well, we aren’t really sure. Beautiful and wealthy, American pop culture is obsessed with every item they wear and every bite of food they pop in their mouth. With nine grandchildren and counting, Jenner has continued to manage her “brand” built on the images of her large family. And we eat it up.

The common rhetoric that is thrown at Suleman and other families without significant financial means is that they are irresponsible for birthing children that they 'cannot afford.'

Large families such as the Gosselin’s of John and Kate Plus 8 and the Duggar family of TLC’s 19 Kids and Counting dominate a lot of air time due to America’s love/hate fascination with their large families. They are famous — and wealthy — for the simple fact that they have a lot of kids. America sits in rapt attention while we watch them fold laundry or drive their conversion vans around town. Kristen Bell is a mom of two, but one of seven siblings and step-siblings. Tori Spelling has five children; so do Chris O’Donnell, Taylor Hansen, and Jamie Oliver. Kevin Costner and Mel Gibson have seven each. Eddie Murphy has nine.

But do we praise all large families? Not so much. Remember when Nadya Suleman gave birth to octuplets, making her a mother to 14 children? America ripped her to shreds for her irresponsibility and “burden to society.” Ten years later, “Octomom” is actually doing quite well, according to a recent interview with the New York Times: her children are secure, tight-knit, well-looked-after. She feels that America’s labeling and shaming of her from the onset caused her to spiral downwards. She wasn’t met with the same support she would have been, had she been wealthy.

The common rhetoric that is thrown at Suleman and other families without significant financial means is that they are irresponsible for birthing children that they “cannot afford” or will need to use government assistance. The UK even passed a law that beyond two kids, families could not receive tax breaks or benefits. China itself has had its infamous one-child law, which has now been relaxed to allow two children, and many fans of smaller families assert that having more than two children is not environmentally kind. Large broods, when not famous or wealthy, are constantly questioned and criticized for a myriad of reasons. Families are on the receiving end of not only raised eyebrows but negative comments from strangers.

“Are you a daycare?”

“Are they all yours?”

“You do know how that happens, right?” *stranger winks toward my children*

“That’s a lot of mouths to feed/college to pay for/other generic financial judgement.”

“So do they all have the same dad?”

“Oh my, you sure do have your hands full…” (Hey, then help me get them across the street instead of gawking!)

Large families report hearing these types of comments every time they leave the house: Assumptions about their finances, their family planning (or lack thereof) or the parentage of their children. In fact, women in households making more than $500,000 a year are having more children than those making less, per 2011-2015 US Census data. That is, the richest women are having larger families than those making less as the wealth gap widens. Children have become something of a status symbol.

As proof, large wealthy or famous families simply don’t receive the kind of criticism that poorer families do. The world practically beatified Brangelina for their six children, and praised every whiff of information that hinted she might be caring for them herself, instead of schlepping tasks off on hired help. Even Catherine, Duchess of Cambridge, is urged to procreate as fast as possible: with three kids in five years, she’s already joking about feeling “broody” to the excitement of royal watchers. If she were just Kate at the WIC office or in line at the grocery store, she would receive scads of advice about why she shouldn't add a fourth. A dukedom supporting her uterus changes everything, apparently.

Sure, large families can laugh off some of these comments or learn to steel themselves against them. Parents come up with rehearsed comebacks to quip at their detractors. At the root of all this judgement, though, is the belief that some lives are worth more than others. That the children of wealthy, powerful, or famous families have more of a right to take up space on this planet while the large families of typical commoners are an anomaly or a burden.

The real victims of this mentality, sadly, are the children who are constantly hearing these comments. They internalize these judgements about their existence in their family and, by extension, their value to society. Can we be happy for their parents, instead?