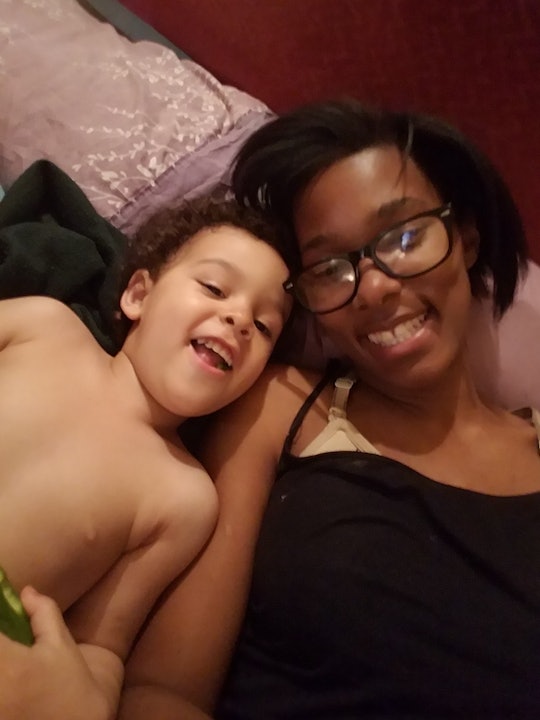 Nursing Aversion Taught Me The Single Most Important Thing About Breastfeeding

I used to love when my 3-year-old son climbed into my lap to nurse. I found it relaxing, and I was grateful for the few minutes of quiet and calm in our busy day. One day, however, he latched on and I felt like I was going to jump out of my skin. I don’t know what changed, but nursing was suddenly anything but calming — it was downright torturous, and I wanted nothing more than for it to be over. I didn’t want to startle my kid, so I just tried to grin and bear it until he finally unlatched. Then I let out a huge sigh of relief.

"What had I just experienced?," I wondered. This had never happened to me before. Every suck felt like I was getting jabbed in the chest with a hot poker, and I felt like I wanted to peel the skin off my body. So when he tried to come back later to nurse, I offered him juice and a snack instead.

I didn't know it at the time, but I was experiencing nursing aversion, or what some refer to as breastfeeding agitation. It’s a very real thing, and it can happen to anyone at any time — regardless of how long you've been breastfeeding or how much you love it.

Nursing aversion is rarely discussed, but it's extremely common: while there haven’t been any specific studies done on it, according to La Leche League, roughly one-third of mothers who are breastfeeding experience nursing aversion at some point. There are varying degrees of nursing aversion, but in my case, I went back and forth between feeling mildly annoyed while my son was nursing to literally wanting to rip him off my body (not to mention my breasts). I didn't have this feeling every time I nursed.

Sometimes, I felt perfectly fine and normal. But other times, it was really hard to nurse a kid to sleep when all I could think about was how I'd rather be doing literally anything else than what I was doing at that moment. Nothing could distract me from those feelings: not television, not burying my nose in my phone, not even deep breaths and meditation. There were times when I would be so angry with him for needing to nurse that I would be short and mean to him. I hated myself for it, but I couldn’t stop the feelings from bubbling up if I tried.

There were times when my son would and crawl into my lap to nurse. I would look at him and think, “Not today, tiny Satan.”

I never spoke to my pediatrician or a lactation consultant about my nursing aversion, but when I did more reading on the topic, I discovered there are a variety of triggers that I had. One of the biggest triggers is hormonal changes, as some women say they experience nursing aversion during ovulation or right before their periods. Another trigger is changes in the breastfeeding relationship. As a single mom who works from home, I don’t often get a break from my kid, and while I tried to put more boundaries on our breastfeeding relationship as he got older, that only seemed to exacerbate the things that led to me feeling “touched out," like him groping me or tweaking my nipples. I think the lack of time to myself was really starting to weigh on me, which led to me becoming totally uninterested in nursing.

There were times when my son would and crawl into my lap to nurse. I would look at him and think, “Not today, tiny Satan.” I didn’t want to feel this way, but it felt completely out of my control.

I love my kid, and I loved breastfeeding him, or else I wouldn’t still be nursing him. But I also think that I subconsciously knew that our nursing relationship was coming to an end. I was just hesitant to do anything about it, because I wasn’t sure if my son was ready.

I thought I would be sad or nostalgic about weaning, but surprisingly, I literally feel nothing but relief.

Eventually, my nursing aversion got to the point that I felt completely detached from nursing, and the only way to soothe my feelings was to wean. So I've started the arduous process of weaning my son. I thought I would be sad or nostalgic about weaning, but surprisingly, I literally feel nothing but relief. I guess that means that it was time.

If you are struggling with aversion, the most important thing is to talk about it. Reach out to another nursing momma. You’d be surprised how much talking about it can help. You’re not alone — and you don’t have to suffer alone, either.