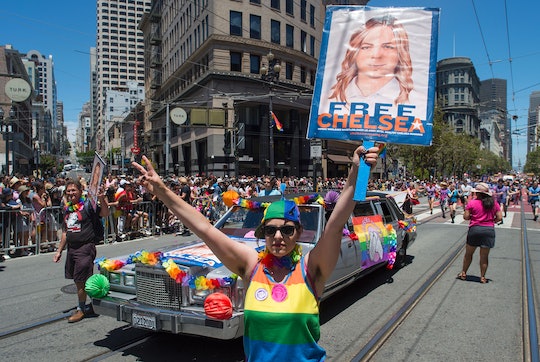 Former soldier Chelsea Manning was convicted of leaking official Army documents in 2010. She was sentenced to remain in prison for 35 years — a transgender woman condemned to spend 35 years in an all-male prison. In the past year, Manning has tried to commit suicide twice. But the former soldier is finally seeing a light at the end of the tunnel: On Tuesday, President Obama commuted Chelsea Manning's sentence in a move that will undoubtedly attract plenty of praise and criticism alike.

Manning has already served seven years of her sentence at Fort Leavenworth prison in Kansas. She was convicted in 2010 of sharing nearly three-quarters of a million sensitive military documents. Manning (who was born Bradley Manning but has identified as female since she was a child) was an intelligence analyst in Iraq with access to several classified databases within the military. Some of the leaked materials appeared to expose abuse by Iraqi soldiers working with American forces, as well as a helicopter attack in Baghdad that appeared to be shooting at members of the press and civilians. She shared these documents with WikiLeaks, as she explained at the time, to encourage “worldwide discussion, debates, and reforms." Manning was court-martialed and dishonorably discharged from the Army, and plead guilty to 20 charges, the most serious of which was violating the United States Espionage Act,or "aiding the enemy", and sentenced to 35 years.

President Obama made the decision to commute her sentence on Tuesday, which will now expire on May 17. Immediately, reactions were all over the board.

Republican Sen. Tom Cotton told CNN he thought Obama's decision to commute the sentence of a whistle blower, particularly while the president has been making much of the harm WikiLeaks caused in the 2016 election, was "disappointing." In 2010, Donald Trump told Fox News that Manning's actions were "disgraceful" and that "there should be like death penalty, or something."

Republican Sen. Bill Cassidy was also shocked and horrified by the news, referring to Manning as a "traitor" and saying:

If somebody leaks our state secrets, endangers Americans directly, we need to set an example that is severe and consistent.

It is, of course, important to note, as White House Press Secretary Josh Earnest said, that Manning "is somebody who went through the military criminal justice process, was exposed to due process, was found guilty, was sentenced for her crimes, and she acknowledged wrongdoing."

Manning has been at Fort Leavenworth since 2011, and has tried to end her life twice since there. She has been denied gender reassignment surgery and subjected to solitary confinement on more than one occasion. This has caused a surge of sympathy for Manning; WikiLeaks Julian Assange (who became a household name after Manning leaked documents to his site in 2010) recently said he would agree to be extradited if she was released.

While some voiced outrage and concern, others rejoiced in Manning's imminent freedom. Chase Strangio, a lawyer from the American Civil Liberties Union (which represented Manning) released a statement saying:

Since she was first taken into custody, Chelsea has been subjected to long stretches of solitary confinement -- including for attempting suicide -- and has been denied access to medically necessary health care. This move could quite literally save Chelsea's life, and we are all better off knowing that Chelsea Manning will walk out of prison a free woman, dedicated to making the world a better place and fighting for justice for so many.

Chelsea Manning exposed serious abuses, and as a result, her own human rights have been violated by the US government for years. President Obama was right to commute her sentence, but it is long overdue. It is unconscionable that she languished in prison for years while those allegedly implicated by the information she revealed still haven’t been brought to justice.

For her part, Manning is struggling to stay alive and well. The military has allowed her to partially transition to becoming a woman (she takes cross-sex hormones, is allowed to wear "light" makeup and women's undergarments, but is not allowed to grow out her hair).

In May, it looks as though Chelsea Manning will be free at last — in more ways than one.