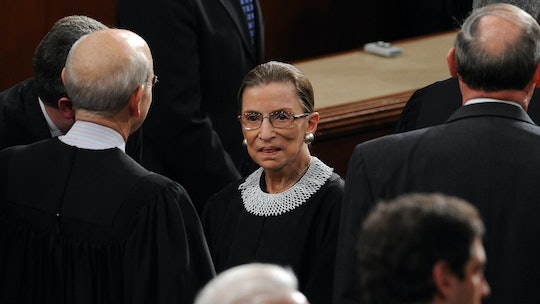 Obama Hugged Ruth Bader Ginsburg At The State Of The Union, & It's An Adorable Tradition — PHOTOS

Attention Notorious RBG fans: At the 2016 State of the Union, Justice Ruth Bader Ginsburg was in the house, and when Obama arrived to deliver his final State of the Union address, the most powerful man in the world showed proper deference to the Supreme Court Justice. When he entered the House chamber, President Obama hugged Ruth Bader Ginsburg, because when you encounter a small woman who is one of the world's most towering intellects, a fierce feminist, incredible progressive, scathing dissenter, and also reportedly a very nice person, you bend down, and if she'll let you, give her a hug.

It was a great hug, too. Justice Ginsburg fully embraced the guy and even gave him a pat on the back. I'm guessing that there's really nothing more encouraging that could happen to you when you're about to give a speech in front of millions of people, and you never stop needing that, even if you've done it seven times before. Even better is the fact that these two are supposedly great friends. Ginsburg has said that she and the President "got along famously" when they first met back when Obama was a senator. Obama even likes her nickname, but then again, how could you not?

Tuesday night's hug was actually the latest in a log line of Obama-Ginsburg State of the Union Hugs. It's kind of a thing. Check it out:

And here's a montage, courtesy of Irin Carmon, author of Notorious RBG: The Life And Times of Ruth Bader Ginsburg:

Promise us you'll keep doing this every year, you two, wherever you are.