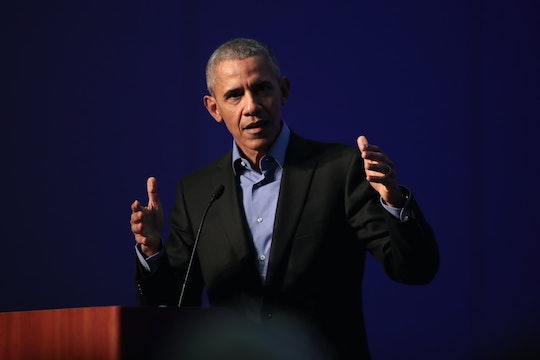 Obama Sent A Touching, Handwritten Letter To The Parents Of A Parkland Shooting Victim

In light of the tragic shooting at Marjory Stoneman Douglas High School in Parkland, Florida that left 17 dead, politicians from all over the country have responded in very different ways. While President Donald Trump and Marco Rubio and other Republican leaders have waved off protestors' demands for stricter gun regulation, President Barack Obama has expressed his support of improving the country's gun safety laws. While Trump remained curiously silent during the March For Our Lives, Obama has mailed some of the people affected by the shooting personalized letters. The latest example is a touching letter Obama sent to the family of Parkland victim Scott Beigel, as reported by New York Magazine. The letter is making the rounds on the internet, and it proves that even though Obama is no longer in office, he's still making a difference.

Beigel, who was a geography teacher Marjory Stoneman Douglas High School, was killed after unlocking his door to allow students to hide inside his classroom, as reported by The Sun-Sentinel. He was not able to lock the door in time, and he was killed, saving the lives of the students in his classroom. Beigel's parents, Michael Schulman and Linda Beigel Schulman, recently opened up about their son's death in an interview with New York Magazine. They shared the handwritten letter Obama mailed them after their son was killed.

As per New York Magazine, the handwritten letter, which was signed "Barack Obama," read:

Your son seemed like an extraordinary young man, and Michelle and I grieve alongside you. We can only imagine the hardship you are going through; hopefully all the wonderful memories can help ease the pain. We’ll get the details about your fund in his honor. In the meantime, you are in our thoughts and prayers.

The fund Obama refers to is the Scott J Beigel Memorial Fund, which, according to the fund's website, was set up by Beigel's family. The fund will raise money to send children to camp who could not otherwise afford the expense. A photo of Obama's letter can be viewed on the fund's website.

When asked if Trump sent her his condolences, Beigel's mother told the outlet:

The White House did not immediately respond to Romper's request for comment regarding whether or not anyone in the White House mailed Beigel's family a message of condolence.

It would be interesting to hear what Rubio wrote in his letter to Beigel's parents, considering Rubio has made his stance regarding gun legislation and the National Rifle Association very clear. When Parkland shooting survivor Cameron Kasky confronted Rubio at the CNN Town Hall to ask if he would promise to stop accepting donations from the NRA, he refused to make that promise.

Many have criticized Rubio for accepting NRA money. In fact, at the March For Our Lives, Marjory Stoneman Douglas High School students wore price tags that read $1.05, as explained by Vox. Based on statistics that the Florida senator has accepted $3.3 million in NRA campaign donations, divided by 3.1 million students in Florida, the Parkland students calculated that each Florida child's life was worth $1.05 to Rubio.

The above letter is not the only one Obama mailed to Parkland, Florida following the mass shooting. Barack and Michelle Obama also sent a handwritten letter to the collective students who survived the attack.

"You’ve helped awaken the conscience of the nation, and challenged decision-makers to make the safety of our children the country’s top priority," the Obamas wrote, as reported by Mic. "We have no doubt you are going to make an enormous difference in the days and years to come, and we will be there for you."

Both Obamas have also tweeted their support of the Parkland students' efforts to pass stricter, common-sense gun safety laws in the United States.

Even though Obama is no longer in the White House, he's made it clear that he will still act as a leader when the nation needs him to. It's definitely reassuring to know that Obama has the Parkland survivors' backs.