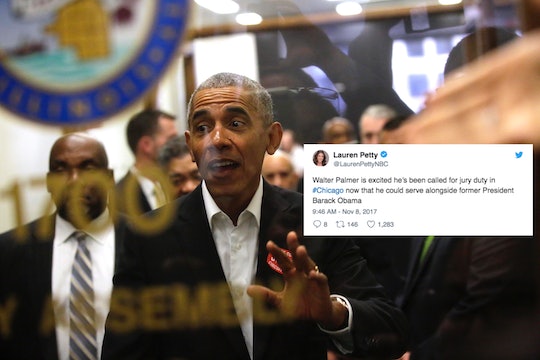 Does anyone ever actually want to sign up for jury duty? Of course not. It's one of the oldest running jokes in the book, a meme of its own before memes were a thing. Nobody likes jury duty. Well, almost nobody. I mean, I guess it would depend on who else was showing up for jury duty. Because when former President Barack Obama showed up for jury duty on Wednesday, basically everyone was losing it. I don't even live in his district but... yeah, I'm ready to sign up if they need me.

Obama was summoned to jury duty in Cook County in Chicago back in October, according to a report by NPR, proof that even people who served two terms as President of the United States aren't above the dreaded task. Cook County Chief Judge Tim Evans told NPR:

We have a system in Cook County where one serves one time a year on the jury, and that time has arrived for President Barack Obama. He's a great citizen of his city and this county. We're happy that he recognizes his responsibility as a citizen to serve just as anybody else would.

Evans wasn't the only one who was happy to see the 44th President of the United States show up for jury duty; pretty much everyone else freaked out over it too. When Obama showed up for jury duty at The Daley Center on Wednesday, the fan fare was... well. Exactly what you might expect.

As Obama entered through the back door, complete with a full security detail, regular folk were cramming the halls and clamoring to get pictures of him, or even better, potentially shake his hand. If those people happened to be other would-be jurors, they were lucky. The former president took time to shake hands with each and every juror who had shown up for duty, and even signed copies of his books for those who were aware he would be there and brought them along, just in case, according to USA Today.

For those jurors who hadn't heard the news that Obama had been asked to show up for jury duty, it was a pleasant and unexpected surprise.

Then there were those who might have been skipping out on jury duty... only to find out what they missed.

As was Obama; after arriving for jury duty and causing spectators to go crazy in the morning (one court clerk was even overheard saying, "He's gorgeous!" according to The Chicago Tribune), by noon Judge Tim Evans had dismissed him.

Typically speaking, when judges and lawyers look at jury selection, potential jurors are dismissed if they might have either any specific prejudices that would impede their decision (race, gender, or religion), or could suffer hardship as a result of jury duty, like loss of job, child care, etc. In Obama's case, it could have been as simple as being reluctant to choose a juror whose voice would have more of an impact than others, as litigator Aaron Katz told NPR:

Most jury consultants really recommend against sitting someone who, in a deliberation room, is going to have a really out-sized voice. But if I'm feeling either really good about my case or really bad about my case, I might actually want a high-impact juror like Obama on my jury, because I know I can tailor my arguments to that one juror, hoping that he or she can carry the day.

After the excitement of the morning, it seems Obama's potential fellow jurors will have to carry on without him. But they might have the last laugh; he won't be earning that sweet juror payout of $17.25 per day like they will.