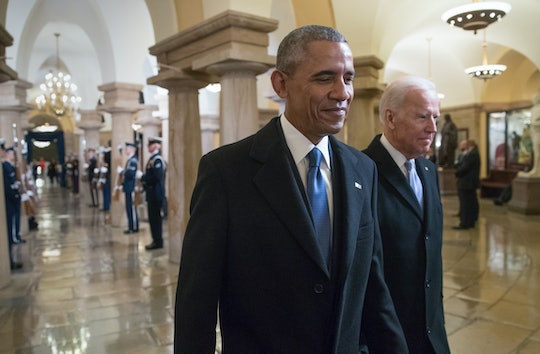 Everyone who's ever held a desk job they didn't love has spent plenty of time daydreaming about being out in the sand and surf and enjoying life. Right? Don't worry — President Obama feels your pain. Although he could barely get anything done in office, thanks to a stubborn Congress stonewalling him at every turn, it's the the 44th president is finally getting to kick back and relax — and he's doing it in typical dad-style too. This week, Obama went kitesurfing with billionaire Richard Branson and basically sent all Americans who are currently panicking over the Trump administration's latest actions the same message: "Sorry, busy, call back later."

Seriously, Mr. Obama? We all know he was itching to get out of office, but it felt like he understood Democrats' pain when he patted President Trump on the back on Inauguration Day. Like he would be there — like that stepdad replaced by another stepdad, who still lingers in the background, ready to hear you out when your best friend pulls a fast one on you and makes you upset. He even posted a dad joke via Twitter on Jan. 20, just after boarding the helicopter that would take him and former first lady Michelle Obama off to the airport. "Hi everybody! Back to the original handle," he wrote, using his old @BarackObama account. "Is this thing still on? Michelle and I are off on a quick vacation, then we’ll get back to work."

Um, when, Mr. President? Your Twitter message implied that you were going on a quick reprieve and then would carry on being the kind of inspiring community organizer people know and love. But now, you've left us with an angry POTUS, a travel ban, and a secretary of education who wants to fight grizzly bears. Basically, we're saying that your vacation, while short, is still too long.

Obama right now is essentially on a Bachelor group date with Richard Branson. There are helicopters and boats and kite surfing, and lots of Twitter reactions and paparazzi photos. The only thing missing is a dozen other people getting mad at each other and someone butting in to ask if they can "steal Branson for a few minutes."

But I get it. The man led a country for eight years with little to no thanks from his colleagues. Kite surfing with Richard Branson is probably a well-deserved break from all the chaos and madness of Washington. (Not that it makes us feel any less petrified about Sean Spicer tweeting his government Twitter passwords.)

Obama spent the last eight years rewriting health care legislation, signing executive actions to initiate drone attacks, trying to make headway on halting mass shootings, and still getting nowhere. After all of that, he and Michelle were visibly ready to leave the White House in January. They were not the most perfect presidential couple ever. But they were a relatable family, by all means and they carried the office on their shoulders. After all of the bullying and crazy attention, it makes sense that Obama and his family would just peace out and get some sun, sand, and alone-time.

Which is the 44th president is now kitesurfing with Richard Branson. Who can blame him? It may sting, but I suppose we ought to just leave him to it. After all, it's probably the least we can do.

More Like This
Barack Obama Says He "Won The Lottery" When He Married His Wife Michelle 30 Years Ago
Serena Williams Shares How Her Daughter Comforted Her After Losing A Big Match
10 Horror Movies With Creepy Kids That Will Scare The $#*% Out Of You
Exclusive: Your Favorite Yeti Is Back With More Adventures In New 'Abominable' Series