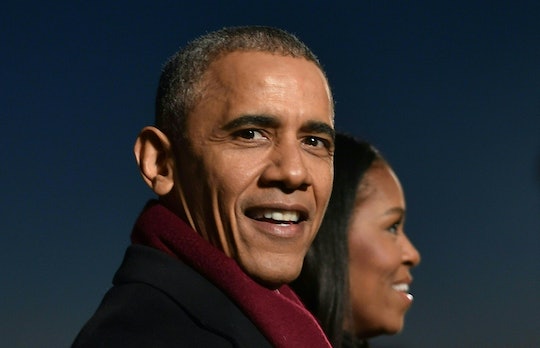 President Obama arrived in the White House for his first term on the promise of hope and change, and he knew that many of the more vulnerable populations within this country — and around the world — needed just that. Over the course of this presidency, the president championed equality and the expansion of opportunities of each American he would govern: low-income families, LBGTQ people, boys and young men of color through his My Brother's Keeper mentorship initiative. Of special note, Obama's best mic drop moments for mothers and women, and all those actions he took to move women's rights forward, in particular show that he recognizes the challenges much of that population faces in both the professional and personal realms — and that he worked hard to address these to improve our quality of life, as well.

Obama, of course, moved into the White House with his own crew of women: daughters Sasha and Malia and his accomplished wife, first lady Michelle Obama. Perhaps this influenced Obama's mission to make both work and health care equitable for women, to encourage girls to get involved in STEM fields, and much more. What's more likely is that the president knew that fighting for the girls and women who make up half of this country's and the world's population was simply the right thing to do.

And he often did it with signature blend of charisma, empathy, and thoughtfulness, as some highlights from his tenure illustrate:

When He Signed The Lilly Ledbetter Fair Pay Act

It was the first bill the new president signed into law in 2009, and a vital one. The Lilly Ledbetter Fair Pay Act, named for a retired tire factory worker who discovered that after 19 years that she had been paid less than male employees throughout her career, it relaxed the statute of limitations that previously dictated that others in a similar situation would have had to sue within 180 days of the wage discrimination.

"It is fitting that with the very first bill I sign — the Lilly Ledbetter Fair Pay Act — we are upholding one of this nation’s first principles: that we are all created equal and each deserve a chance to pursue our own version of happiness," Obama said at the signing ceremony, according to The New York Times.

When He Blasted The Idea Of A "Glass Ceiling"

At a subsequent presidential debate during his 2012 reelection bid, the president reflected on the signing of the Lilly Ledbetter Fair Pay Act. His own grandmother, he said, hit the "glass ceiling" at her bank job, routinely training people who would soon become her bosses. The situation, for Obama, is unacceptable.

"This is not just a women’s issue; this is a family issue, this is a middle class issue, and that’s why we’ve got to fight for it," he told his constituents at a presidential debate that fall, in Hempstead, New York.

When He Made Health Care More Equitable For Women

Obama's signature health care legislation, the Affordable Care Act, is now in imminent danger of repeal at the hands of his successor and the newly Republican-controlled Congress, but when it passed in 2010, it was literally life-changing for many women. For the first time, it was illegal for women to be charged more than men for health insurance, and all plans were mandated to cover prenatal care and childbirth — a pre-Obamacare rarity, according to NPR.

When He Made These Moms' Days

Not quite a "mic-drop" moment, per se, but you can't deny that the leader of the free world stopping to call some moms who had just written him, to wish those moms a happy Mother's Day, is adorable.

When He Made Workplaces More Hospitable For New Moms

Under the Affordable Care Act, new moms gained a major new and necessary protection at work. Businesses with 50 employees or more now must provide women with the time and space during the workday to express breastmilk for up to a year after a child's birth. With this provision, Obama made progress in showing the country that working and mothering are not mutually exclusive, and supported women's ability to do both.

When He Gave An Important Shout-out To The First Lady

For last year's official White House Mother's Day address, Obama took a moment to give a shout-out to wife and first lady Michelle Obama with this one stellar line:

In our house, everybody knows that President is only the third-most important job in the family. So this weekend, I’m going to take a little extra time to say thank you to Michelle for the remarkable way she does the most important job: being a mom.

Obama also gave thanks to all the women in his life who had raised his family, as well as women everywhere who, while not mothers themselves, did the job of mothers without the title. In a mic-drop-worthy moment, Obama added,

We ask our mothers to do more than their fair share of just about everything. Making sure they’re treated fairly is the least we can do.

Even though his own Democratic party often accuses the GOP of waging a "war on women," Obama weighed in during a 2012 conference on women and the economy to say that framing is "oversimplified."

"Women are not some monolithic bloc," he said a the time, according to CBS News. "Women are not an interest group ... They're over half the country and its workforce."

When He Reauthorized Protections Against Domestic Violence

President Obama knew that in order to improve and maintain women's quality of life, it was imperative for the government to do everything in its power to protect them from physical harm. So, he reauthorized the 1994 Violence Against Women Act in 2013, allocating $660 million over five years to supporting programs that dedicated to providing legal assistance, transitional housing, counseling, and support hotlines to victims of rape and domestic abuse, according to The Washington Post. And, for Obama, it was a move meant to promote women's empowerment, as he said at the signing ceremony:

One of the great legacies of this law is that it didn’t just change the rules; it changed our culture. It empowered people to start speaking out. It made it okay for us, as a society, to talk about domestic abuse. It made it possible for us, as a country, to address the problem in a real and meaningful way. And it made clear to victims that they were not alone — that they always had a place to go and they always had people on their side.

When He Called Opportunity Gap "Unacceptable"

In a 2014 speech about women and the economy, the president was blunt. "I think about my daughters," he said, after against reminiscing about his mom putting herself through school while raising two kids and his grandmother hitting the glass ceiling at the bank. "And the idea that my daughters wouldn’t have the same opportunities as somebody’s sons — well, that’s unacceptable. That’s not acceptable."

And Obama means it when he says that women should have equal opportunities and protections everywhere. At the end of 2013, he signed a comprehensive bill aimed at cracking down on sexual assault within the military, which included provisions like legal assistance for victims and implements punishments for retaliation against them, according to ThinkProgress.

"Sexual assault is an outrage. It is a crime, and that’s true for society at large," Obama said, during a joint press conference with the visiting President of South Korea Park Geun-Hye, according to The Hill. "And if it happens inside our military, whoever is carrying it out is betraying the uniform that they’re wearing. ... Bottom line is, I have no tolerance for this. ... I expect consequences. I don't want just more speeches, awareness programs or training where people ultimately look the other way."

(It's worth it to not that, as Obama face his last days in office, though, he has faced criticism even from within his own party that he did not do enough in terms of sexual assault reform in the military. Whether he'll help tackle that after leaving office, through the private sector, remains to be seen.)

When He Created The White House Council On Women And Girls

Obama created the White House Council on Women and Girls in the beginning of his first term, bringing together the heads of every federal agency and White House office. The goal is to "ensure that each of the agencies in which they're charged takes into account the needs of women and girls in the policies they draft, the programs they create, the legislation they support," according to the White House.

And this focuses on the entire world, not just Americas. For example, climate change could alter the world's water supply, according to The Guardian, meaning that some girls around the world would have to spend time they could be spending getting an education carrying water. Plans to address climate change must consider this aspect as well as environmental ones.

"I want to be clear that issues like equal pay, family leave, child care and others are not just women’s issues, they are family issues and economic issues," Obama said, at the signing in March 2009. "Our progress in these areas is an important measure of whether we are truly fulfilling the promise of our democracy for all our people."

When He Celebrated Black Women

The president invoked the ethos of his wife, Michelle Obama, while imploring the country to ensure women have opportunities at the 2015 Congressional Black Caucus Foundation. While recognizing the contributions of female Civil Rights leaders, Obama told the audience that her teachers had warned the now-first lady against having ambitious goals.

He Consistently Gave Women The Respect We Deserve

During the brutal campaign cycle, BuzzFeed News created a short but depressing video called "Trump vs. Obama: Talking About Women," juxtaposing some of Obama's thoughts on the subject with his successor's. Among Obama's is the above speech excerpt form the Congressional Black Caucus Foundation, but Donald Trump leads with this, aimed at a female Celebrity Apprentice contestant: "You dropped to your knees? Must be a pretty picture, you dropping to your knees."

In contrast, here were a few of the president's mic-drop-worthy lines, as highlighted in the same video:

... The idea that my daughters wouldn’t have the same opportunities as somebody’s sons, well, that’s unacceptable. That’s not acceptable.

[Michelle and I have] got a vested interest in making sure that our daughters have the same opportunities as boys do.

Considering who we will soon have in office, Obama's mission to make this country a fairer, more welcoming place for women, mothers, and girls take on a heart-wrenching poignancy.