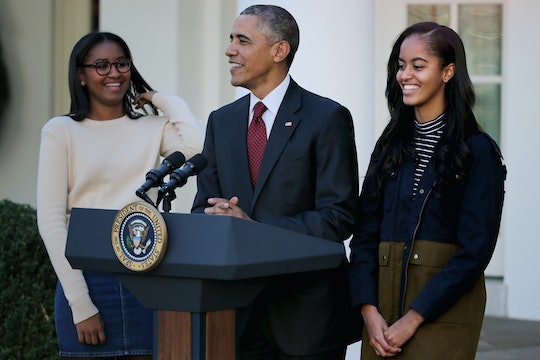 It's safe to say Barack Obama knows a little something about leadership. And whether you supported him as the 44th President of the United States or not, I think many can at least recognize the difficult decisions he handled with grace and the massive load he juggled as Commander-in-Chief. As for where he picked up his impressive skills? Apparently, Obama's daughters Malia and Sasha taught him how to be a good leader, which isn't too surprising because raising kids is pretty much a full-blown crash course in this arena.

The former president is father to 21-year-old daughter Malia and 18-year-old daughter Sasha with former First Lady Michelle Obama, and he has always been very adamant about prioritizing his daughters needs. Unlike another president who seemingly forgot he has a 13-year-old son, Obama has been a consistent presence in his daughters' lives before and after his presidency. And although I'm certain that has been incredibly beneficial to their own well-being, Barack Obama recently opened up to a crowd at the data-analyzing group Splunk in San Francisco about how raising two very different women helped his leadership abilities.

As Obama outlined in his speech, the basis of Malia and Sasha's influence orientates in their key differences as people. Comparing his daughters' upbringing to raising plants, he stated, according to Business Insider:

They're a bamboo or they're an oak or they're a chestnut. They all need water, sunlight, some TLC, but how they grow and what pace, when the branches sprout, when they flower at any given time, it's just different. And so, our daughters were different, and as they got older, they became identifiable.

He noted that his older daughter Malia is more like him in personality while his daughter Sasha is more like his wife Michelle. And because they are so different, he had to learn how to parent them based on their individual temperaments. "What that meant was, in parenting, the idea that you do the exact same thing with each child the same way actually doesn't make sense," he said, according to Business Insider. "There has to be equity and fairness in terms of wanting them to get to the same outcomes, but we had to take sort of different strategies with our girls on certain things."

Learning to deal with his daughters' personalities and parent accordingly ended up helping Obama while he was in the Oval Office, as he explained in his speech, reminding him that some people can handle being dealt with in a more blunt manner while others need criticism to be "wrapped in compliment sandwiches," according to International Business Times.

He also found that dealing with his children helped him understand something vital about human nature in general, noting, according to the Daily Express: "You’ve got to give folks enough room and ownership to be able to figure stuff out, and by doing that, it means they’re going to be making mistakes."

Although Barack Obama will always have critics, it's hard to deny the strong bond he shares with his daughters. And there isn't a more perfect example of this than his impressive leadership skills, which they shaped for the better.