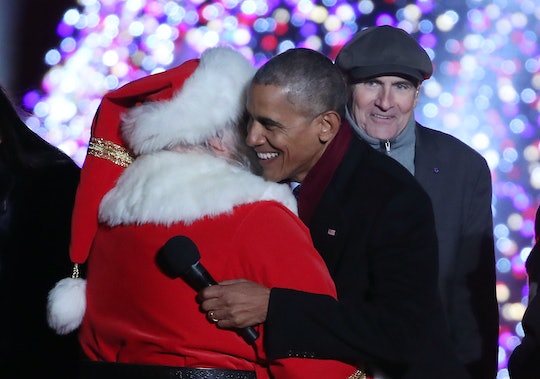 Oh that Barack Obama. I've heard that not everyone on the planet is a huge fan, and I guess everyone has a right to their opinion. But let's take politics out of the equation for just a moment here. Because it's the holiday season and who doesn't want to just drop the cynicism and appreciate President Obama's surprise visit to a children's hospital bearing gifts and singing Christmas carols?

The former president surprised staff and patients at the Children's National Health System in Washington, D.C. on Thursday by showing up in a Santa hat and carrying a bag full of toys like some sort of cool, hip Santa Claus. Because, of course, Obama wore a grey sweater and pants instead of going all out with the whole suit and everything... he still has to look cool, guys.

But just because Obama was looking cool doesn't mean he was acting cool, oh no. He was getting right into the holiday spirit by leading an impromptu carol sing of "We Wish You A Merry Christmas" with the staff. Now go ahead and watch this video and see if you can avoid getting emotional.

After the sing-a-long, Obama visited the young patients in their rooms, taking selfies and bringing them presents. Some of the little ones got really emotional when he came in their room (sometimes dancing his way in, which I loved), breaking down in tears as he hugged them and comforted them.

I just want to thank you to all of you guys. We've had a chance to talk to some of these wonderful kids and their families, and at a time that is obviously tough for folks and as a dad to two girls, I can only imagine. In that situation, to have nurses and staff and doctors who are caring for them, and looking after them and listening to them and just there for them holding their hand, that's the most important thing there is. What a great reminder of what the holiday spirit is supposed to be all about.

It can't be easy for parents and sick children, spending a lot of time in the hospital. And I imagine it gets exponentially harder over the holiday season, when the rest of the world is bustling around and preparing to spend time with family and friends. It must feel rather lonely. Which is why it's so important for those families and the staff who try to make their stay as easy as possible to get a little surprise to lift their spirits.

It would be so simple to dismiss this visit from Obama to the children staying at the Children's National over the holidays as a publicity stunt. And you know what? I don't care if it was. Because to those kids and their families, it doesn't really matter. What mattered was the fact that they felt seen and loved and appreciated by someone kind for a few moments out of their day. What mattered was everyone in that hospital coming together to enjoy the holiday spirit.

It's really all that matters, at the end of the day.