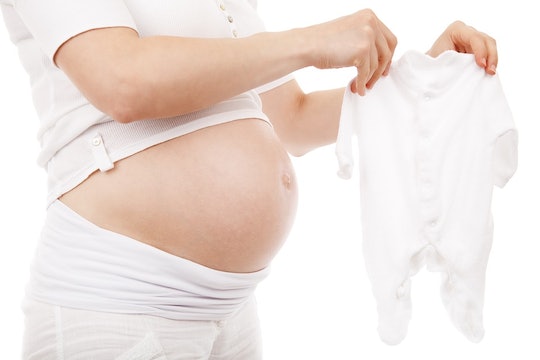 This OB Has The Best Answers To Your Pregnancy Questions

Pregnancy is a magical time in a woman’s life. But this new experience will undoubtedly also get confusing and overwhelming at times. That being the case, pregnant women — especially first-time expectant moms — will have a lot of questions for their doctors. But, look no further because this OB’s hilarious sign answers every pregnancy question with the most perfect responses. Even if they don't necessarily set the record straight, it will certainly give soon-to-be parents a much-needed laugh during this nerve-racking and super stressful time.

Earlier this week, an expectant mother shared the humorous sign from her OB’s office on Reddit and it’s quickly gone viral since. The sign — entitled “Pregnancy Q & A” that was posted in her doctor's waiting room — answered 10 of the most common questions pregnant women (and their partners) may ask themselves and their doctors at the many appointments they’ll go to during those nine months. And the knee-slapper responses are just perfection.

Of the many funny answers to the many typical questions preggos ask, this OB's humorous spin on them include:

A: "With any luck, right after he finishes college."

Q: "My wife is five months pregnant and so moody that sometimes she’s borderline irrational."

If you can't stop laughing, you're not alone. One Reddit user commented that every answer made her laugh out loud. "Gotta love an OB with a sense of humor!" another user wrote on the viral thread.

As the Huffington Post reported, this isn't the first time the hilarious sign has made its rounds on the internet. Just last year, for instance, these same pregnancy questions also had expectant parents laughing, sharing the photo more thousands of times. It also got some traction on social media back in 2012.

But considering the responses and comments from the most recent Reddit post, these jokes don't seem like they'll ever get old. "This has been going around for years and I never, ever, ever get tired of reading it," another Reddit user commented earlier this week. "It makes me laugh every time."

The sign has clearly lightened the mood for many stressed-out, hormonal, and worried expectant parents. And thanks to the most recent Reddit post, even more moms will get to have a laugh that they might desperately need as they wait for the bundle of joy to arrive.