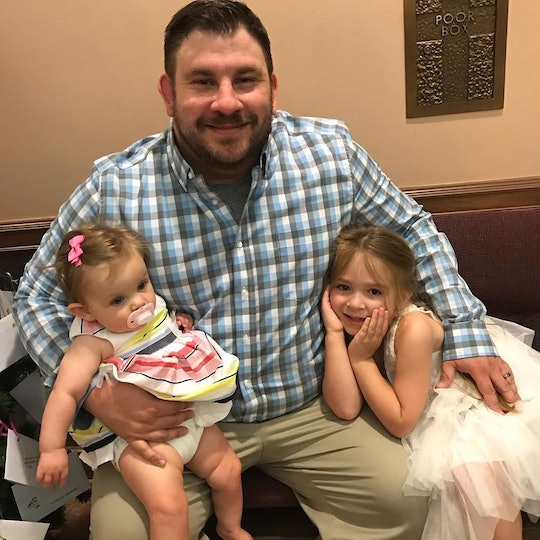 Why We Love #GirlDads So Much

I mark it in my calendar — NYC work trip — and text my husband to remind him. It's a month away, but he'll need to make arrangements to work from home those few days so he can be here for our daughters while I'm gone. "Got it!" he texts back. And then, "You'll have to show me how to do that half-up-half-down hairstyle you do for Alice. I only know how to do ponytails." Because my husband is a #GirlDad, and this is his main concern with me being away at work: that he won't know how to properly do our 5-year-old's favorite hairstyle.

He's not a dad who claims he's "babysitting" his children when he's alone with them. He's not a dad who needs me to write down the entire bedtime routine so I can have dinner with a friend. He's not a dad who fumbles with baths or homework or putting on ballet shoes. He's involved and active and loves being a dad. He would be this way whether he had daughters or sons, but look, I can't pretend there isn't something extra tender and endearing about girl dads. In the same way we love to look at the relationship between mothers and sons, there is truly something special about my husband being a dad to girls.

In the wake of Kobe Bryant's death, Sports Center anchor Elle Duncan shared a tribute to him, speaking specifically about the love he had for his daughters. "I would have five more girls if I could," he told Duncan. "I am a Girl Dad." Bryant didn't shy away from introducing his daughters to sports, he didn't need a son to carry on his legacy. He had it all right there in his little girls, and he knew how special that was.

And it makes me think of my husband. My husband, who was already a good guy before becoming a father of daughters, now has a different perspective on some things. He would have voted for Hillary Clinton in 2016 no matter what, but he says he specifically cast his ballot for Hillary Clinton with our oldest daughter, Alice, in mind. "It's important for her to see," he said. "It's important for her to know women can lead."

It's not that he's a better dad because he has girls, and it's not that he wouldn't be happy with a son one day, but being a #GirlDad is different than being a father to only sons.

In one of Alice's favorite books, Dragons Love Tacos 2, there's a line about using a time machine: "A time machine lets you travel through time — back to the past, when you were an itty-bitty baby, or forward to the future, when you've grown to be an old man!" Nick always adds "or old woman" to the end of that line.

He uses the phrase "as a dad of daughters" because that's who he is. His stance on women's rights didn't change because he had girls — he's always thought women were also human beings who deserved equality — but like anybody, his situation as a #GirlDad has changed how viscerally he feels about things. He refuses to watch any kind of Dateline special or Netflix series about young girls being hurt, he truly can't let it go when someone tries to force our daughters into hugs or kisses, and he goes above and beyond to make sure Alice, and our 1-year-old, Lucy, know that they are always, always, always to be heard. Even when they're screaming like wild banshees.

It's not that he's a better dad because he has girls, and it's not that he wouldn't be happy with a son one day, but being a #GirlDad is different than being a father to only sons. He's breaking social stigmas and stereotypes as a dad because he has daughters. His daughters are getting a man in their corner, a man who supports them and their mother with such ferocity that even I don't like to complain about myself in front of him. And together, our family has a towering pillar of strength in a husband and father who called me a goddess because I delivered his babies. Because he didn't know just how incredible women are until he had the three of us.

And now our girls know how incredible they are, in part, because they have him — the ultimate ally, the ultimate partner. A #GirlDad.