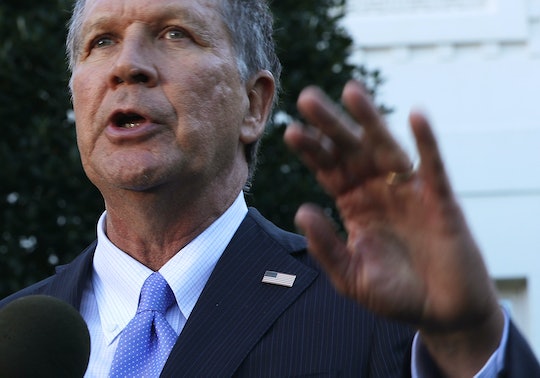 Ohio Gov. John Kasich has a serious decision before him; it's called the "heartbeat bill." State lawmakers approved an amendment on Tuesday to a child welfare bill and managed to slip a new abortion ban in with the bill. If Ohio's six-week abortion ban proposal is approved, it would be the most aggressive abortion ban in the country. Not only would it be unconstitutional, it would shift focus away from women's reproductive rights to the fetus; the "heartbeat bill" is intended to ban abortions once a heartbeat is detected, as early as six weeks into a woman's pregnancy.

Despite the fact that the Supreme Court already blocked similar measures in North Dakota and Arkansas, the Ohio House approved the bill in a 56-39 vote, with House Democrats vehemently opposing the bill. Not even Ohio's largest anti-abortion group, Ohio Right To Life, supported the bill, because it believed it would not hold up to any constitutional challenges. But Republican Senate President Keith Faber said he thought the bill "has a better chance than it did before" based largely on the change in federal government once President-elect Donald Trump takes office, according to Think Progress.

A new president, new Supreme Court appointees change the dynamic, and there was consensus in our caucus to move forward.

The idea of forcing women to carry a fetus to term once a heartbeat is detected (despite the fact that many women don't even realize they're pregnant at six weeks), is a throw back to the days before Roe v. Wade. The decision by the Supreme Court to legalize abortion in 1973 in all 50 states was transformative; before Roe v. Wade, most states did not allow women to seek out legal abortions. During the 1950s and 1960s, approximately 5,000 women per year died as a result of illegal abortions. Since the legalization of abortions, the death rate has decreased substantially; only 0.6 percent per 100,000 legal abortions end in death, according to the World Health Organization.

We are a pro-life caucus... The passage of this legislation in the Ohio Senate demonstrates our commitment to protecting the children of Ohio at every stage of life.

Democratic Sen. Charleta Tavares had planned to vote in favor of Bill 493 but ultimately opposed it because of the addition of the heartbeat bill. She told CNN:

I believe everyone has a right to their own body. We allowed a good bill that protects the health and safety of our children to be bastardized into a government takeover of women's wombs.

The American Civil Liberties Union of Ohio has already made it clear it plans to fight the heartbeat bill if passed, and lawmakers on both sides have called the bill unconstitutional.

Kasich has 10 days to decide if he will veto the legislation; Kasich has said that he is "pro-life with the exceptions of rape, incest and the life of the mother." If the bill is not vetoed, lengthy, expensive lawsuits are expected.