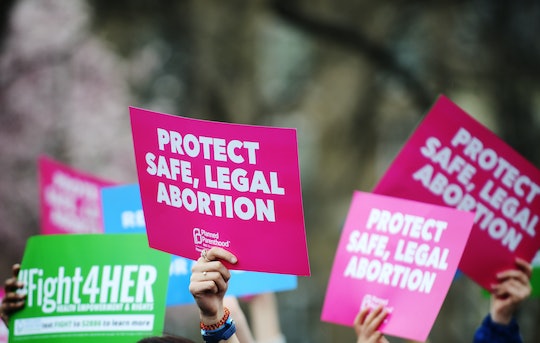 On the same day Ohio Gov. Mike DeWine signed the state's so-called "Heartbeat Bill" into law, Ohio Rep. John Becker, a Republican, introduced additional anti-abortion legislation to the House. Ohio's new anti-abortion bill, similar to the controversial "Heartbeat Bill", is full of inaccuracies and poses a threat to the medical care of countless people, according to experts.

Despite pushback from reproductive healthcare advocates and activists, DeWine signed a bill Tuesday that bans abortion once a fetal heartbeat is detected, which can happen as early as six weeks, according to Parents. The legislation is problematic for many reasons, but especially because many people don't know they're pregnant at six weeks.

Kellie Copeland, Executive Director, NARAL Pro-Choice Ohio said about the bill, according to a press release: "Ohio legislators are waging a crusade to outlaw abortion in our state; forcing people to continue pregnancies regardless of the harm that may come to them or their family."

The Georgia House passed a similar "Heart Beat Bill," HB 481, aka the "Living Infants Fairness and Equality (LIFE) Act," back in April. NARAL Pro-Choice Georgia State Director Laura Simmons referred to the bill in a press release as "an all-out assault on the reproductive health and safety of Georgia women."

To make matters worse for the state of reproductive care in America, Becker introduced legislation to the Ohio House Tuesday that would ban "most private insurance coverage for abortions," according to the Statehouse News Bureau.

More specifically, the bill, H.B. 182, would ban non-therapeutic abortions that include "drugs or devices used to prevent the implantation of a fertilized ovum," according to the Ohio Legislative Service Commission. A non-therapeutic abortion, as defined by the OLSC, is "an abortion that is performed or induced when the life of the mother would not be endangered if the fetus were carried to term."

The bill would also remove current exceptions for rape and incest cases, according to Rewire.

As for what this all means? The bill is another attempt to restrict a person's right to choose.

Given the bill's part about banning non-therapeutic abortions that include "drugs or devices used to prevent the implantation of a fertilized ovum," it's reasonable for people to wonder whether certain methods of birth control, like Plan B, for instance, won't be covered by insurance if the legislation is passed.

What's shocking? Becker doesn't even have an answer to this question."I don't know because I'm not smart enough to know what causes abortions and what doesn't," he told Ohio news station WKRC. "The bill is just written if it causes an abortion,' and people smarter than me can figure that out."

But arguably the most upsetting and confounding part of this bill is its stance on ectopic pregnancies, a condition that occurs when a "fertilized egg implants and grows outside the main cavity of the uterus," according to the Mayo Clinic. It's important to note here that an ectopic pregnancy can be life-threatening due to the possible rupture of the fallopian tube. If a rupture occurs, it can lead to severe bleeding.

Becker, similarly to his knowledge on birth control, doesn't seem to understand the concept of an ectopic pregnancy and the risks associated with this condition.

First off, the bill's non-therapeutic abortions excludes "a procedure for an ectopic pregnancy that is intended to replant the fertilized ovum into the pregnant woman’s uterus," an operation that literally doesn't exist.

"That doesn’t exist in the realm of treatment for ectopic pregnancy. You can’t just re-implant. It’s not a medical thing," Jaime Miracle, deputy director of NARAL Pro-Choice Ohio, explained, according to the Statehouse News Bureau.

Furthermore, the bill seemingly implies that if a person chooses to end an ectopic pregnancy, the procedure wouldn't be covered by insurance.

Dr. Daniel Grossman, a clinical and public health researcher on abortion and contraception, summed up the concerning situation best, tweeting: "While we’re in the middle of a maternal mortality crisis, it is unconscionable to consider placing obstacles in the way of treatment for ectopic pregnancy... Your bill is dangerous on many levels, @BeckerGOP, since it creates even more obstacles for patients seeking safe abortion—especially for women of color and those with low incomes."

Others shared their own experiences with ectopic pregnancies, outlining how necessary medical procedures saved their lives.

"Look, I don't talk about this a lot, mostly because I don't see this as my story, but my wife literally nearly died from a ruptured ectopic pregnancy," one person tweeted. "From the bottom of my heart, f—k all of the people associated with this bill."

"Anti-choice bills like this will kill women. My husband and I had tried for 3 years to conceive, but before Kid1, I had an ectopic pregnancy," someone else shared. "My doctors rightly recommended surgery to abort the NONVIABLE EMBRYO. If I hadn't had an abortion, I WOULD BE DEAD."

"My ectopic pregnancy exploded my right Fallopian tube and I had to have emergency surgery," another person said. "Am I to believe they would implant a clump of cells that caused that damage into my uterus and then expected me to carry it to term after that WHICH IS NOT A THING."

As these brave commenters have already highlighted, Becker's bill is a threat to the health and well-being of countless people. Not only is this half-baked and medically inaccurate bill an attack on a person's right to choose, but it could have dangerous consequences.

Furthermore, it's problematic when lawmakers try to create policies that aren't based in "sound science and evidence," as the American College of Obstetricians and Gynecologists pointed out in a statement.

"Politicians must seek to improve access to care, not restrict it. Legislative restrictions fundamentally interfere with the patient–provider relationship and decrease access to necessary care for all women, and particularly for low-income women and those living long distances from health care providers," the statement reads. "Health care decisions should be made jointly only by patients and their trusted health care professionals, not by politicians.”

If you're in Ohio, you can contact Becker via Ohio's House of Representatives' website. For those who live out of state, consider donating to the Planned Parenthood of Greater Ohio and NARAL Pro-Choice Ohio.