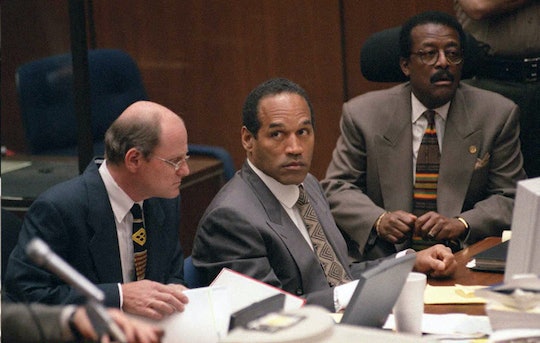 O.J. Simpson Jury Quotes About The Verdict Show Just How Complicated The Trial Was

The finale of FX's American Crime Story aired Tuesday night. Of course, there was not much to spoil in terms of the verdict, but it still proved to be an intense retelling. One aspect the show highlighted was the role of the jurors. Being a part of the "trial of the century" — and the decision that the divided the country — certainly could have taken a toll on the jurors. Quotes from the jury after the O.J. Simpson verdict prove that the verdict was not a simple one to make.

One juror, David Aldana, told ABC News his life was changed from the trial. "Lost friends, people that I knew wouldn't talk to me anymore. A few couple of fistfights," he said of his relationships post-trial. He could not believe people still spoke about the trial two decades later, but he still agrees with the verdict. He said on the matter, "Do I think he did it? Yeah, there's a shot that he did do it, but then on the other hand the evidence didn't prove it."

Other jurors stood by the verdict as well. Meredith Vieira interviewed juror Yolanda Crawford just last year. She expressed similar sentiments as Aldana and said, "I felt like we followed the instructions of the judge and the system and it called for a not guilty verdict because, I want to say, of the reasonable doubt."

Some, however, regret the decision. During the initial tally, two jurors thought Simpson was guilty. After the several hours of deliberation, however, they were convinced to rule not guilty. Several jurors — the foreman, Armanda Cooley, and Marsha Rubin-Jackson — spoke to Dateline NBC in 1996 about the trial. "Given that standard and based on the amount of evidence that was presented, then yes, you would have to say that yes, he is guilty," said Cooley. Rubin-Jackson said she stands by the verdict, but if it was a civil case, "I would have to vote guilty."

Jurors claim that racist detective Mark Fuhrman's involvement and the gloves gave reasonable doubt – which resulted in the not guilty verdict. Aldana also spoke to NBC Los Angeles, and said it as possible that the evidence was tampered with, which made him not want to convict Simpson. "The evidence given to me to look at, I could not convict. Did he do it? Maybe, maybe not."

It's clear that at least some jurors doubt that Simpson was innocent. They also, however, had reasonable doubt that he was guilty, and thus could not convict. The O.J. Simpson trial was controversial and complicated, especially within the group of 12 jurors.