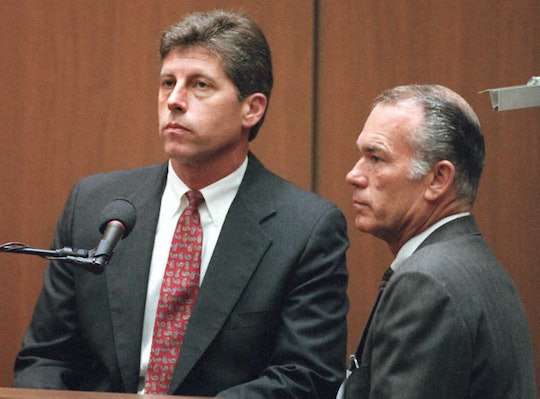 Video Of Mark Fuhrman During The O.J. Simpson Trial Is Just As Dramatic As The 'American Crime Story' Scene

On Tuesday's episode of American Crime Story, new pieces of evidence were introduced. They centered around then-Detective Mark Fuhrman, who was investigating the murders of Nicole Brown Simpson and Ron Goldman. On the stand, Fuhrman denied that he used the n-word in the ten years preceding the trial. In hours of recorded interviews, however, Fuhrman said the word dozens of times — along with other racist and sexist language. The episode also depicted the former detective getting on the stand after the tapes were released, and real videos of Mark Fuhrman during the O.J. Simpson trial show just how important his testimony was.

Screenwriter Laura Hart McKinney interviewed Fuhrman for a movie idea about women in law enforcement over the course of quite a few years. In over 13 hours of footage, Fuhrman said many racist and sexist comments that could have made it into the courtroom. Judge Ito, however, only allowed two instances of his use of racial slurs to be used in trial.

Simpson's defense team accused Fuhrman of planting evidence, specifically the bloody glove outside Simpson's home. When Fuhrman resumed the stand, the first question attorney F. Lee Bailey asked was if his original testimony was completely truthful. Bailey then asked if Fuhrman had ever falsified a police report. When he had asserted his Fifth Amendment right for both, Bailey asked if he would do this for every question. Fuhrman said yes.

Despite his answer, Bailey asked one final question: if Fuhrman planted evidence, as Simpson's defense suspected. Once again, Fuhrman plead the fifth.

Oprah interviewed Fuhrman in 1997 and asked him about this testimony. "Believe me that was the toughest thing I ever did," he said of pleading the fifth. "A lot of people don’t understand the Fifth Amendment, it is not a pick or chose. It is a yes or a no. You take it or you don’t. Once you answer, the question, you open the door to the rest of the question."

Oprah also outright asked him if he had planted the glove; he denied it and said it would be impossible for him to do that.

Fuhrman retired from his position during the trial. He was charged with perjury and pleaded no contest. In 1997, he published a book about the case entitled Murder in Brentwood. Since, he has published several more books about true-crime stories, and now works as the crime scene expert on Fox News. According to Fuhrman's agent, he has not seen American Crime Story.