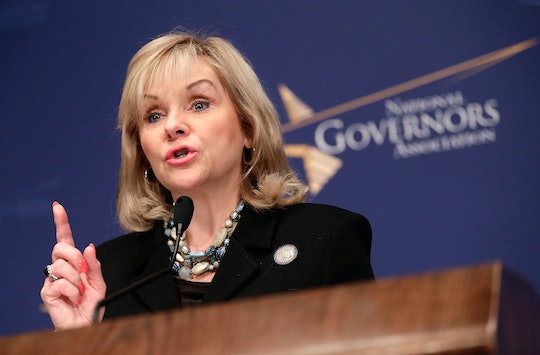 One Republican senator who's also a physician called the measure "insane" before he voted against it. The Center for Reproductive Rights called it "harmful, discriminatory, clearly unconstitutional, and insulting to Oklahoma women and their families," in a letter to the state's governor. But that didn't stop lawmakers there from voting Thursday, sans discussion, to pass proposed legislation that would make it a felony to perform abortions in Oklahoma, potentially subjecting physicians who do so to up to three years in prison and and barring them from practicing medicine there. Now that it's on the way to Republican Governor Mary Fallin's desk, Oklahoma's proposed abortion ban could become law, because conservative legislators there are committed to pushing a slew of largely symbolic bills with the goal of eventually overturning Roe v. Wade, the Supreme Court's landmark 1973 decision that legalized abortion in all 50 states.

"Since I believe life begins at conception, it should be protected, and I believe it's a core function of state government to defend that life from the beginning of conception," the bill's sponsor, Republican Sen. Nathan Dahm, told the Associated Press. Dahm and his supporters know that the legislation will be blocked even if the governor signs it, but nevertheless plan to engage in the lengthy litigation process that will inevitably ensue.

The measure, known as Senate Bill 1552, is unprecedented in its severity, considering that there is no exception for performing abortions in instances of rape or incest or protecting the mother's health, although the procedure would be permitted to save a woman's life. But Fallin has signed some harsh anti-abortion bills in the past, including the establishment of a 72-hour wait period and a (later blocked) ban on the most common form of second-trimester abortion. This time, Fallin, who has not spoken publicly about what she intends to do, has five days to decide whether to sign the bill.

Over the past five years, eight of the state's anti-abortion measures have been challenged in court as unconstitutional, according to the Associated Press, including one that would have forced a pregnant woman to have an ultrasound to see the fetus prior to the abortion. There's no reason to think that the state's newest attempt to restrict reproductive rights will not meet similar objections.

In a letter to Fallin urging her not to sign the legislation, Amanda Allen of the Center for Reproductive Rights called out conservative politicians for supporting the "unconscionable" restrictive abortion legislation:

Policymakers in Oklahoma should focus on advancing policies that will truly promote women’s health and safety, not abortion restrictions that do just the opposite. Anti-choice politicians in the state have methodically restricted access to abortion and neglected to advance policies that truly address the challenges women and families face every day. According to a 2014 analysis, Oklahoma is already one of the most restrictive states in the country with respect to abortion access. And yet, Oklahoma ranks dead last in the country on overall indicators of women’s and children’s health and well-being. Policymakers’ time and effort would be better spent on approving and implementing programs that actually support women and children.

It's incredibly disheartening for women's rights advocates to witness the advancement of a bill that overtly infringes on the autonomy of doctors to do their jobs effectively and of women to make make informed, healthy medical decisions for themselves, all in the name of what some politicians believe to be morally right. Dawn Laguens, Executive Vice President of Planned Parenthood Federation of America, told The Washington Post that the move is "an assault on women." But it's also an attack on the Constitution, which Republicans oftentimes claim to hold so dear.